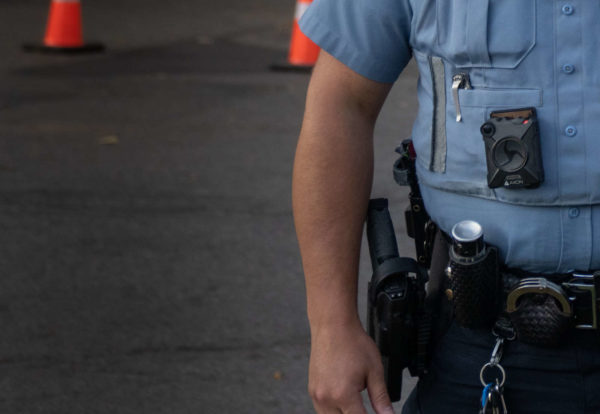 After public outcry and demands from activists, Arlington County is moving forward with long-delayed plans to equip the Arlington County Police Department and other county law enforcement with body-worn cameras.

County Manager Mark Schwartz is scheduled to present the plans to implement the program at a meeting on the Capital Improvement Plan (CIP) tonight (Tuesday).

A presentation for the CIP notes that a body-worn camera system would be implemented for the Arlington County Police Department, Sheriff’s Office, and Fire Marshal’s Office starting in January 2021.

According to a presentation on the budget, the Fiscal Year 2021 CIP includes:

The upgrades total $1.8 million. The presentation notes that the annual expense for camera maintenance, software and data storage — including the equivalent of 7.5 full-time employees dedicated to the effort — is estimated to be $1.6 million.

The CIP is scheduled for review throughout June and July, with a public hearing on Tuesday, June 30, and adoption set for July 18.

Update at 8:45 a.m. — The county has released more information in a press release, below.

The funding in the proposed FY 2021 CIP includes $268,000 for body-worn camera hardware​, $244,000 for upgrades to four County courtrooms​ to support the technology, and $536,000 for data storage, software, and maintenance​. Additionally, $755,000 is proposed to replace the existing in-car camera system to one compatible with body-worn cameras.

If the CIP funding is approved in July by the Arlington County Board, the program will be implemented in January 2021.

“My decision to propose the program now is prompted by the recent events in our country. As I have stated many times, I am proud of our police department and its long tradition of professionalism,” Schwartz said. ”The public’s perception of our officers has been highlighted in each of the resident satisfaction surveys of the past 10 years. We want to reinforce those positive public perceptions and to ensure actions, especially those involving use of force, are transparent. The time has come for body-worn cameras in Arlington.”

The Police Department and the Sheriff’s Office conducted a pilot for body-worn cameras back in 2015, and since then the department has consistently asked for the addition of these cameras to complement the existing in-car camera system. However, due to budget challenges the program has not been proposed previously.

“Our police have sought these cameras because they help promote ACPD accountability and transparency, can be a useful tool to increase officer professionalism and training, and to document police encounters,” Schwartz said. “Our community expects and deserves a culture of transparency, accountability, fairness, trust and respect, and the ultimate measure of success, and the ability to maintain public trust, is based on earning and re-earning the trust and respect of our citizens every day.”

In addition to funding in the FY 2021 CIP, the FY 2021 operating budget that was adopted by the board in April will have to be amended to begin to fund the employee positions associated with this program. That is estimated to be $476,000 in FY 2021 for a partial year.

In total, 7.5 FTEs will be needed in ACPD, Court Technology, and the Commonwealth’s Attorney’s Office to fully support the program. Future operating budgets will include funding for FTEs and ongoing data storage, software, and maintenance, at approximately $1.6 million per year​.

The FY 2022 and FY 2023 CIPs will include funding for technology upgrades to the seven remaining courtrooms​.