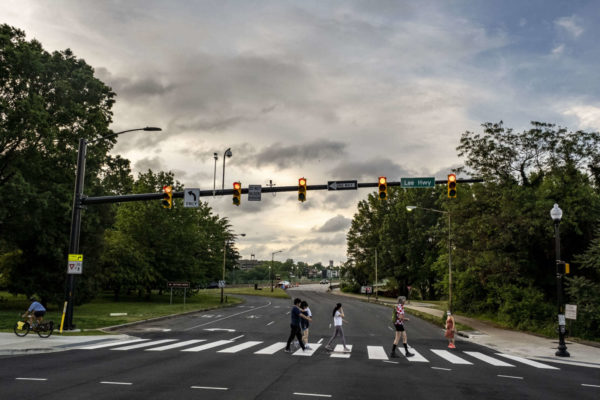 At a time when racial justice has taken center stage in Arlington and around the world, when Confederate monuments are being removed or toppled by angry mobs, keeping the leader of the Confederate army’s name on one of the main east-west thoroughfares through Arlington might be untenable.

(Granted, Arlington itself is named after Robert E. Lee’s house, and the county’s logo is a stylized version of the home, which is now more closely associated with Arlington National Cemetery.)

Lee Highway, once part of an auto trail that ran from New York City to San Francisco via southern states, is now partially a commuter route and partially a commercial strip for North Arlington neighborhoods. It is currently subject to a planning process — albeit one stymied by the pandemic — that is attempting to envision a new future for the corridor.

In 2017, after a white nationalist rally and violence in Charlottesville, the Arlington County Board released a statement saying it was seeking the legislative authority from the state to rename both Jefferson Davis Highway and Lee Highway. It received authority to rename the former thanks to an opinion from Attorney General Mark Herring that the county only needed permission from the Commonwealth Transportation Board, not the then-GOP-controlled legislature.

With Democrats now firmly in control in Virginia, renaming Lee Highway should be achievable, though it may not be the highest priority during a global pandemic and a budget crunch.

What do you think? If you do think it should get a new name, let us know any suggestions you might have in the comments.