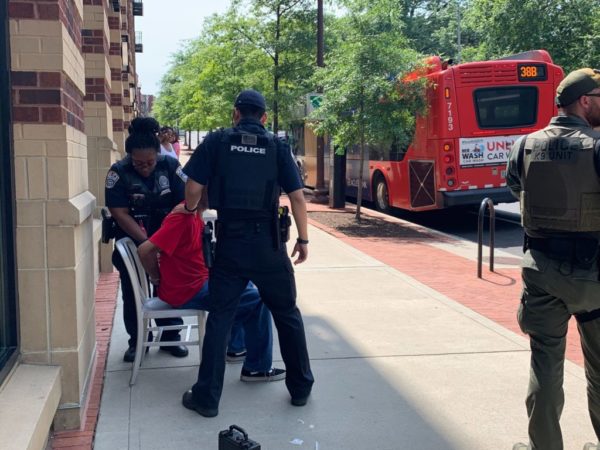 That’s according to 2019 arrest data shared by the Arlington County Police Department, at the request of ARLnow and a local community group. Its release follows calls for police reform and nationwide protests over the deaths of Black men and women at the hands of law enforcement.

ACPD officers arrested 3,613 people in 2019, according to the data, and just over half were Black. Only 35.8% of those arrested live in Arlington.

The data provided says 45% of arrestees were white, but that includes those most of the 19.6% of arrestees identified as Latino. (Latino is considered an ethnicity while Black, white, Asian/Pacific Islander and American Indian/Alaskan Native are classified as races in the ACPD data.)

More on the ACPD arrest data, from a report that accompanied it:

In a recent Williamsburg Yorktown Daily article about the disproportionate number of Black arrestees in that part of Virginia, a director of the state chapter of the ACLU quotes an unnamed former Arlington commonwealth’s attorney in explaining the county’s disproportionate arrest statistics as largely a function of the residency of those arrested.

Jenny Glass, director of advocacy for the American Civil Liberties Union of Virginia… said the previous commonwealth’s attorney in Arlington County gave a similar explanation when Glass noticed 60 percent of the arrests were black people even though they made up around 10 percent of the population.

“I was looking into if there was any validity why the jail in Arlington County had such a disparate [number] of Black people in it,” Glass said.

“It’s because we arrest a lot of people in D.C.,” Glass said was what the former commonwealth’s attorney told her.

The ACPD report similarly suggests that when residency is separated out, the racial disparities are not as stark. However, even among Arlington residents, the proportion of Black arrestees is still about four times higher than that of the population.

Meanwhile, Arlington officers wrote 38,766 non-parking citations in 2019 and the demographics of those receiving citations is more in line with the county’s population.

“Total traffic citations and warnings given to Arlington residents (28.5% of total citations/warnings) closely resemble the racial demography of Arlington,” the ACPD report says. “76.2% of traffic summons/warnings were issued to White residents, 14.2% to Black residents, 5.9% to Asian residents, 3.6% to Other/Unknown residents, and 0.1% to American Indian/Alaskan Native residents.”

The report adds that white and non-white drivers were equally likely to get off on just a warning during a traffic stop.

Equity, particularly racial equity, was identified as a key 2020 priority for Arlington County government at the beginning of the year.

Local criminal justice reform advocates have called for Arlington Police Chief M. Jay Farr, who is retiring at the end of the year, to be replaced by a new chief “who is committed to justice system transformation, eliminating bias, and implementing new methods of policing.”

Farr wrote a letter to the Arlington community to accompany the release of the arrest data. The full letter is below.

The Arlington County Police Department remains committed to building our trust with our community through transparency. As such, we are providing our arrest and traffic data demographics for 2019.

There are several situations when an arrest can be made. In some cases, the officer has discretion and in other cases, they do not, such as when state code mandates an arrest or when a victim desires prosecution. Further analysis of the data is needed to look at discretionary versus non-discretionary arrests, and we are committed to having an independent, outside entity look deeper to evaluate the information.

The Arlington County Police Department continues to build upon our strong partnerships with the community and takes great pride in the relationships we have made. The Department will continue to work proactively with the community to identify needed data values to increase transparency with the public. We are committed to enhancing service delivery and evaluating community recommendations to improve our agency. We thank you for your continued support.

Read more →
More Stories
Backyard Homes: Building a Second Home on Your PropertyCommunity Matters: How Are We Representing (In) Arlington?