The Arlington County Board took a first step towards the future redevelopment of Shirlington over the weekend.

The Board approved a new “Shirlington Special General Land Use Plan (GLUP) Study,” which has been in the works since December 2017 after being requested by Federal Realty Investment Trust (FRIT), owner of the Village at Shirlington retail center.

The GLUP study contains the broad strokes of the potential redevelopment of Shirlington, which would include taller buildings but the retention of the neighborhood’s “main street” feel.

Shirlington, as people currently know it, was the result of redevelopments in the mid-1980s and mid-2000s, but the current site plan for the area does not allow additional development density. That prompted FRIT to ask for the study, which has been subject to a detailed public process over the past year. Shirlington-based television station WETA, which itself is moving forward with updates to its headquarters, later signed on to FRIT’s request.

“Federal Realty and WETA jointly applied for an amendment to the General Land Use Plan at Shirlington in order to facilitate long-term reinvestment in the Village at Shirlington,” Dan Corwin, Director of Asset Management — Mixed Use for FRIT, told ARLnow. “There are a few locations throughout the Village that provide opportunities for new vertical development that can be done in manner that respects the character and charm that makes Shirlington so special. Importantly, the additional density will facilitate future reinvestments in the public spaces which are needed to ensure Shirlington remains a great place for its residents, workers, and visitors to enjoy.”

The finished study calls for generally higher building heights around much of Shirlington, which currently has heights ranging from one-story retail buildings to a 13-story apartment building. Under the changes, the 13-story Io Piazza building would remain the tallest building in the study area, but higher buildings — from 4 to 12 stories — would be permitted where shorter buildings, or parking lots, currently exist. 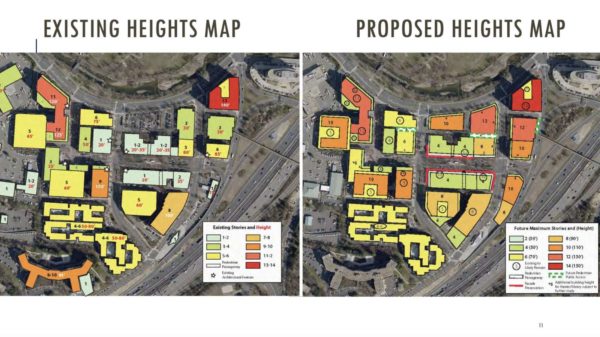 Among other potential changes, the GLUP study would allow an 8-10 story redevelopment of the gas station at the corner of Campbell Ave and S. Quincy Street; the redevelopment of the large surface parking lot along S. Arlington Mill Drive; and the replacement of several existing above-ground parking garages with new buildings.

FRIT unsuccessfully asked for the GLUP study’s approval to be delayed in order for it to make the case for even taller buildings and more flexibility to move around density.

Company representatives told the Board that the redevelopment of the parking garages, as well as the south side of the main Campbell Avenue shopping and dining drag, is unlikely at this time. On the other hand, the company would like to add more height than is called for in the GLUP study to the AMC movie theater site and the site of the former Capitol City Brewing location.

“We need to make sure Shirlington is a great place,” a company representative told the Board, promising to “breathe new life” into the neighborhood. 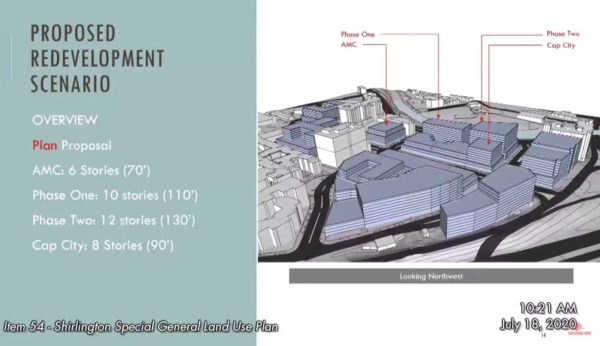 County staff, FRIT said, released its recommendations “without any meaningful opportunity for public discussion.” However, the 275-page Board report was accompanied by 27 pages of feedback from county commissions, civic associations and others.

The Green Valley and Fairlington neighborhoods both lauded the building height “compromise” contained in the study, with the latter writing that “the right balance of height and density” will allow Shirlington to “remain vibrant without seriously damaging that which gives Shirlington its special character.”

The Shirlington and Douglas Park neighborhoods, however, both expressed concern that some of the building heights — particularly for the AMC theater — were “too limiting.”

“We are at a loss to understand staff’s proposals regarding height limitations on both the AMC Theatre site and the surface parking lot along Arlington Mill Drive,” the Douglas Park Civic Association wrote. “The proposed limits are significantly lower than the heights of surrounding buildings and would have the effect of limiting the ability of profitable future redevelopment to occur and thus jeopardize the vitality of the Village at Shirlington in future years.”

In its letter to the Board, the Shirlington Civic Association says that additional density would allow more neighborhood amenities. Potential opposition from surrounding neighborhoods, the civic association said, should be taken with a grain of salt.

You and Staff are well aware that the previous two phases of development of the “smart growth” urban village concept were opposed by the two traditional, suburban neighborhoods on either side of us. In 2003, Fairlington ran a campaign to “Save the Village of Shirlington.” These same people cheerfully admit that they were wrong then and are now loyal customers for Shirlington businesses — even while they express concern about more building and traffic. Their real estate ads proclaim, “Walk to Shirlington!” Had they prevailed before, we would have no Public Library, Signature Theatre, Hilton Garden Inn, Delancey or Shirlington Village Condominiums.

In the end, the Board accepted an amendment from Board member Christian Dorsey, intended to provide a measured bit of flexibility.

“Additional height may be considered as part of a future Site Plan or Phased Development Site Plan application provided it is consistent with the Plan’s Vision and Guiding Principles,” Dorsey’s amendment said. It specifically targets developments that “contribute to fulfilling Plan goals for the community including affordable housing, community facilities, arts and cultural uses and amenities, and other priorities identified in County plans and policies.”

“This is an attempt to create the circumstances where we can get the necessary economic reinvestment in an area all of us frequent and care about immensely,” Dorsey said of the GLUP study. Of his amendment, Dorsey said that it will allow the county “to get the best possible product within reason” for Shirlington and the neighboring Green Valley and Fairlington communities.