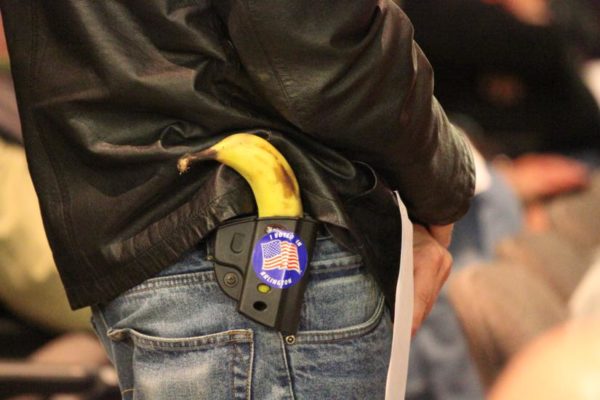 The County Board last night unanimously approved consideration of a new ordinance that would effectively ban carrying firearms on county-owned property.

The move is the first step towards making the ordinance part of county policy, though it will still need to undergo a public hearing and a vote at the Board’s next meeting.

According to a staff report:

The proposed ordinance would restrict the possession, carrying or transportation of any firearms on specified locality property. Buildings and other property will be posted to notify the public of the restrictions. The proposed ordinance provides for a Class 1 Misdemeanor penalty for violations.

“The legislation also authorized these prohibitions in public streets where there is a permitted event, whether or not the event actually received its permit,” the staff report said. “We believe this added authorization allows the County to enforce this prohibition on public streets during an event operating under a Special Event Permit.”

Those not affected by the ordinance would include:

The move comes after the General Assembly approved legislation allowing localities to adopt certain prohibitions on firearms. The first advertisement for the proposed ordinance was at a County Board meeting Wednesday night, with a full public hearing scheduled for Sept. 12.

The legislation is nearly identical to similar legislation passed recently in Alexandria and is shaping up to face similar opposition. County Manager Mark Schwartz vowed to craft the ordinance to be in-line with policies in neighboring jurisdictions.

During the public comment yesterday, there were roughly 60 speakers, with County Board Chair Libby Garvey noting that an unusually high number of speakers who were not Arlington residents.

The public comment started with a statement from Del. Patrick Hope (D) in favor of the change, but the following comments from members of the public were almost uniformly opposed to the measure. Among the arguments that guns could protect owners from being attacked were arguments that the new legislation could be used to target Black Arlingtonians and women who are carrying weapons to defend themselves.

Jamie Saulsbury, who identified herself as a local mother and a person of color, argued that Black Americans are disproportionately impacted by such laws.

“People of color are disproportionately impacted when [there is] a new crime,” Saulsbury said. “The penalty is the most severe penalty the county can assign. People of color consistently receive harsher sentences. Is the Board really okay with putting legal citizens in jail for a year for something that is legal today?”

Saulsbury argued that the new ordinance threatens women who would want to carry weapons in places like parks where they might feel a need to defend themselves.

Another point of contention was County Attorney Stephen MacIsaac’s claim that the new ordinance was drafted in part as a response to the shooting last year in Virginia Beach where 12 people were killed.

“A gun ban would not stop a mass murderer like the Virginia Beach shooter,” said William Barratt, an Arlington resident. “A threat of misdemeanor is not enough to deter criminal acts.

Shawn Poulin, owner of the Nova Armory gun store in Lyon Park, said he invited the County Board to take a concealed carry class, so see the first-hand the kind of training involved.

(Nova Armory’s opening in 2016 prompted an intense community debate at the time. The store has since enjoyed brisk sales.)

The County Board voted unanimously to approve the request to advertise the ordinance for a public hearing in September.

“The basic issue for us to discuss is whether we believe we’re a safer community with more people carrying guns on public property or a less safe community for that,” said County Board member Katie Cristol. “I appreciate the many opinions proffered today, particularly those who shared opinions from the non-stereotypical gun owners concerned about the impacts on minorities, women such as myself, and Jewish people such as myself who have informed the perspective they shared about the need to be armed.”

END_OF_DOCUMENT_TOKEN_TO_BE_REPLACED

More Stories
Health Matters: Is It Safe to Have Elective Surgery During COVID-19?The Bartlett: Schedule a Virtual Tour with Arlington’s Largest Apartment Community