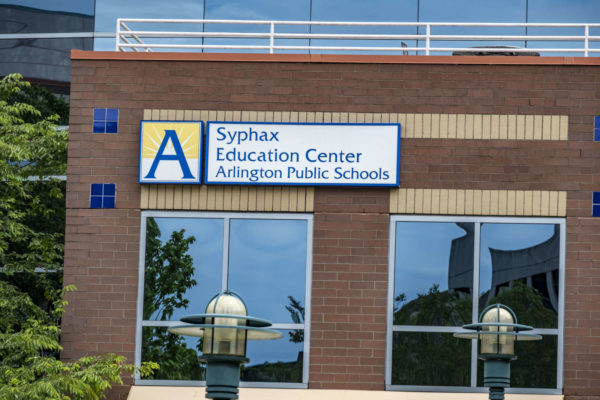 (Updated at 2:45 p.m.) Arlington Public Schools is using Microsoft Teams to facilitate its online learning and some users dislike it so much they’ve started a Change.org petition to try to get APS to use Zoom instead.

“The foundation of any good virtual program rests on the video conferencing platform(s) used,” the petition organizers said. “From our experience this past spring, Microsoft Teams was not an accessible or user-friendly solution for successful remote learning. We would like to bring your attention to the issues many of us had with Microsoft Teams and implore you to make a change.”

APS is starting the school year in September with distance learning only, making the choice of software a more weighty decision than it otherwise might be. Unlike APS, Fairfax County Public Schools attempted to teach new material via online instruction in the spring — the effort proved disastrous due to technology challenges.

The petition says Arlington teachers have had issues with getting students into the virtual rooms, which the petition noted as being among the most basic requirement for a functional online learning system.

“Getting onto their online class meetings should be as easy as walking into a school building,” the petition said. “If it is not, then it is an inequitable, non-accessible system. We have heard story after story from both teachers and families of students not able to access class meetings on Teams (despite setting everything up as directed and in many cases having made it onto calls without issue in the past).  Getting on the class calls easily is the most basic requirement in making a synchronous program viable.” 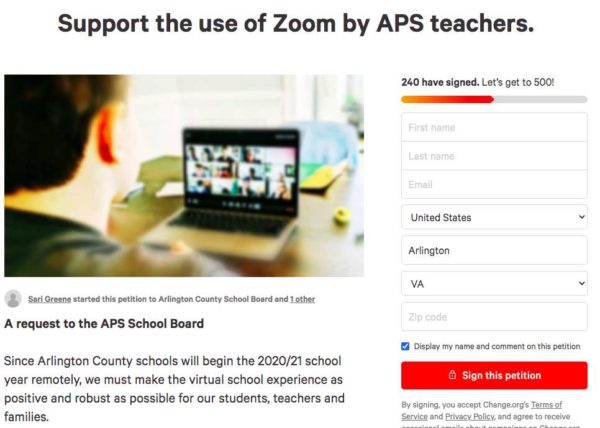 The petition also argues that Zoom has superior sound blocking and video quality to Microsoft Teams, and that parents are more familiar with using Zoom than Microsoft Teams.

“While APS banned teachers from using Zoom for APS business, parents immediately started hosting virtual playdates and class meetings on Zoom,” the petition said. “Zoom is now used for the majority of online courses, tutoring sessions (many with APS teachers), and camps our county’s children are attending. Playdates, happy hours, and parent meetings are happening on Zoom.”

While ranking which video conference system is best tends to be subjective and outside the purview of a local news organization, both have benefits and certain unique features.

The school system, for its part, says Microsoft Teams fit its needs better than Zoom.

“APS uses Microsoft Teams to support a wide variety of instructional functions,” APS said on its website. “For example, while much of the digital coursework is provided through Canvas, videoconferencing is conducted through Microsoft Teams.”

“When the Dept. of Information Services was looking at video conferencing solutions for APS, we included Zoom in our research. We concluded that Zoom was not a good solution for APS,” school spokesman Frank Bellavia told ARLnow. “There were privacy and security concerns with [Zoom]. In addition, shifting to the paid model of Zoom would add a financial burden to the division in a time of very tight budgets. We also want to be sure that teachers aren’t asked to learn multiple tools.”

Bellavia added that Microsoft has been responsive to school needs.

“Microsoft had listened to feedback from educators and is making several improvements to better align Teams with educational needs,” he said. “They are expanding the screen to support 49 faces at the same time this fall. Additionally, later this year they will be rolling out updates such as breakout sessions which is a much-requested feature to support small group instruction, attendance, data reporting, etc.”

As of Monday afternoon the petition sits at 240 signers with a goal of 500.

END_OF_DOCUMENT_TOKEN_TO_BE_REPLACED

More Stories
Glebe Road to Close Near Chain Bridge for Nine Days in 2021Progressive Voice: Imagine “What If” to Transform the Virtual School Experience