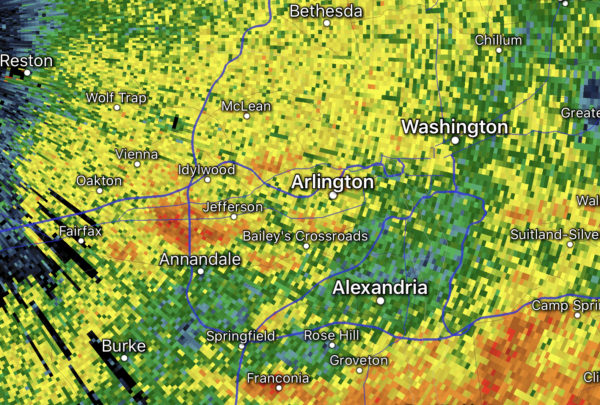 Arlington is under a Flash Flood Watch for the second day in a row.

After nary a raindrop fell in Arlington yesterday, today is starting out with steady rain and a bit of thunder — and there’s more rain on the way.

The National Weather Service says that the rain could be heavy at times and cause flash flooding. Flooding is already being reported south and west of Arlington this morning, in Prince William, Fauquier and Spotsylvania counties.

The Flash Flood Watch is in effect throughout the day today for most of the D.C. area More from NWS:

Through this evening slow moving thunderstorms capable of producing heavy rainfall may develop today. Heavy rainfall from thunderstorms may lead to flash flooding. Potential impacts include rapid rises of water, flooded roads and flooding of structures in low lying areas near streams. Landslides and washouts are also possible.

A Flash Flood Watch means that conditions may develop that lead to flash flooding. Flash flooding is a very dangerous situation. You should monitor later forecasts and be prepared to take action should Flash Flood Warnings be issued.

Another flash flood watch is in effect for today. Multiple rounds of thunderstorms with heavy rain will be possible. pic.twitter.com/w40WR0SEvU

END_OF_DOCUMENT_TOKEN_TO_BE_REPLACED

More Stories
Morning NotesArlington is No. 3 Place in U.S. for Runners, Study Finds