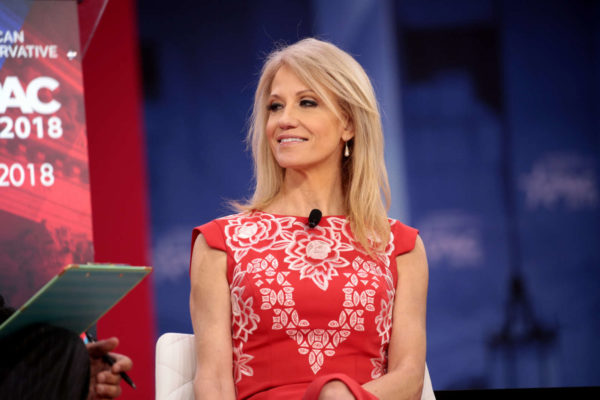 Kellyanne Conway, senior advisor to President Trump, announced last night that she will be leaving the White House at the end of the month to attend to family matters.

Prior to her involvement in the Trump campaign and administration, Conway — a D.C. resident — was a consultant and pollster. Her financial disclosure includes prior work for organizations like the American Conservative Union, National Rifle Association, Tea Party Patriots — and Arlington Public Schools.

“Her company did do work for us a few years before she worked on the Trump campaign,” APS spokesman Frank Bellavia confirmed to ARLnow. “Her company did our climate survey which was the predecessor to the Your Voice Matters Survey.”

One publicly-posted document shows some of the work she did for the school system.

In 2014, two years before Conway joined the Trump campaign, her firm The polling company, inc./WomanTrend conducted the APS Community Satisfaction Survey, writing in an executive summary of the poll’s findings that APS “earns high marks across-the-board.”

“90% of parents, 85% of staff members, and 79% of community members give the public schools in Arlington either an ‘A – outstanding’ or ‘B – very good’ grade,” Conway wrote to then-Superintendent Dr. Patrick Murphy. Conway also pointed out that most APS staff were happy with their level of compensation and that 18% of APS students had been bullied during the past school year, among other key findings.

Conway was paid in excess of $5,000 in a year for her work with Arlington Public Schools, according to her 2017 executive branch financial disclosure, though an exact figure was not given.

APS appears to be the only public school system in Conway’s financial disclosure, as compiled by ProPublica. The list also includes one local university: Catholic University of America.