The Arlington County Board has given its unanimous stamp of approval to plans for a revamped public park in the shadow of Amazon’s HQ2.

The Board approved a master plan and design guidelines for Pentagon City’s Metropolitan Park, which as currently configured is perhaps best known for being a large patch of grass where dogs from neighboring apartment buildings relieve themselves.

The new park, expected to be completed in 2023, will feature lush meandering paths, a central green for gatherings and events, tables for outdoor dining, two 2,000 square foot dog parks, an edible garden, and public art, among other amenities. 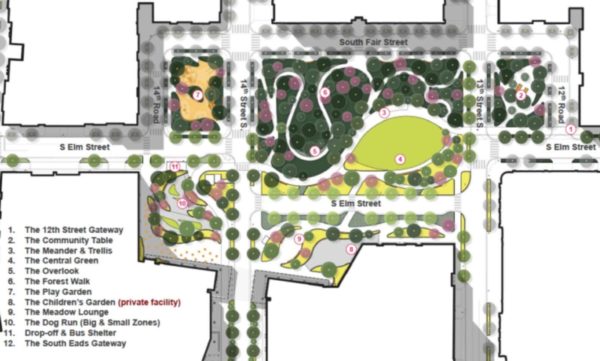 James Corner Field Operations conducted its community outreach process for the park design virtually, as a result of the pandemic, with live video presentations and online surveys. The park design is a fusion of several presented concepts, with community feedback taken into account during each step of the way.

The online process won plaudits from at least one of the citizen-led county commissions involved.

“Several Commissioners noted that the virtual public engagement was thorough and well designed and allowed for much broader participation than would otherwise be the case for in-person meetings alone,” wrote Phil Klingelhofer, Chair of Arlington’s Urban Forestry Commission. “We would encourage the County to consider utilizing this virtual method of public engagement going forward even after the Covid-19 restrictions on public meetings have ceased as way to foster greater inclusivity and feedback.”

More on the park’s approval from an Arlington County press release, below.

The Arlington County Board today adopted a park master plan and design guidelines for the expansion and transformation of Pentagon City’s Metropolitan Park.

The 2.47-acre public park will create an urban oasis on the site of Amazon’s east coast headquarters. Amazon agreed as part of its community benefits package for its headquarters site plan to provide the $14 million needed for the renovation, and to maintain the park in perpetuity. The headquarters and park are expected to open in 2023.

“This innovative design will create a park with amenities for residents, office workers, and visitors, of all ages and abilities, to enjoy for generations to come,” County Board Chair Libby Garvey said. “The public engagement process produced a plan that we can all be proud of, a plan that will transform Met Park into the green heart of Pentagon and Crystal cities.”

The Board voted unanimously to adopt the park master plan and design guidelines. […]

END_OF_DOCUMENT_TOKEN_TO_BE_REPLACED

More Stories
Coronavirus Update: About 100 New Cases in Arlington Per WeekCents of Community: Is it Time to Refinance Your Home Loan?