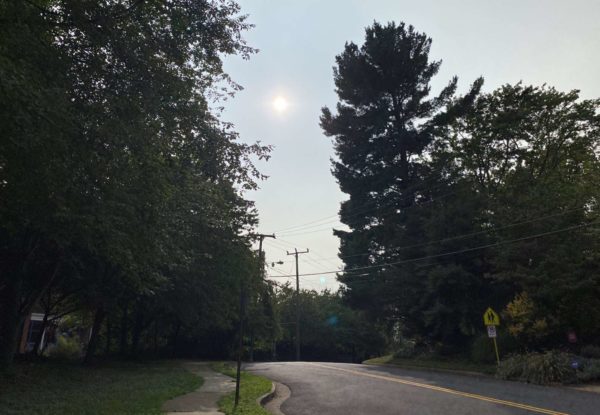 Restaurant Closes in Pentagon City — “Sad to report that A-Deli at ⁦@PentagonRow⁩ has gone out of business. Mr. Kapoor and his wife are great people. I hope they can rebound in a new venture.” [@CartChaos22202/Twitter]

Another Hazy Day on Tap — “It will be another day without much in the way of cloudiness. With at least some smoke likely to be in the air once again, highs will be held back somewhat, as readings will mainly reach the low and mid-70s.” [Capital Weather Gang]

Some COVID Tests Come With Steep Price — “When Lisa Robertson sought coronavirus testing for her college athlete daughter, a pediatrician recommended a small, independent pharmacy in Arlington, Virginia. Preston’s Pharmacy charged $35 to take a nasal swab specimen and sent it off to a lab, Principle Diagnostics, for quick results. The lab billed her insurance company $864 – more than eight times what the federal Centers for Medicare and Medicaid Services reimburses for COVID-19 test.” [USA Today]

GOP Congressional Candidate Presses Case — “If you’re going to go down anyway, you might as well go down swinging. That seems to be the feeling of Jeff Jordan, the Republican nominee attempting to unseat U.S. Rep. Don Beyer (D-8th)… Jordan used a debate sponsored by the Arlington County Civic Federation to press his political philosophy. ‘I have fought socialism and tyranny my entire life,’ he told the online audience.” [InsideNova]

Marymount Rises in Rankings — “For the third consecutive year, Marymount University has risen in U.S. News & World Report’s Best Colleges Rankings. After jumping more than 20 spots in last year’s list, Marymount is once again moving up among the Best Regional Universities in the South – now ranked at No. 31 in the region” [Press Release]

‘Space Jam’ Outdoors Tomorrow in Ballston — “Ballston Exchange will be hosting three separate movie nights on the Paseo in between 4201 and 4121 Wilson Blvd. One ticket is required for each group of four or less. Ticket includes a 6’x6′ feet picnic blanket and a $10 gift card to a Ballston Exchange retailer.” [Eventbrite]

Alexandria Architectural Board Disses Arlington — “‘They’re very nice buildings, but they don’t belong in Old Town,’ BAR member Lynn Neihardt said during the Sept. 2 meeting. ‘We’re getting buildings that don’t reflect the Old Town context at all under the guise of providing affordable housing… The buildings to me speak Ballston, Crystal City, but not Old Town.’ BAR member Christine Sennott underlined that point in saying: ‘This is Ballston. We don’t want to be Ballston.'” [Washington Business Journal]

END_OF_DOCUMENT_TOKEN_TO_BE_REPLACED

More Stories
Just Reduced Properties in ArlingtonMorning Poll: Will You Be Driving an Electric Car By 2030?