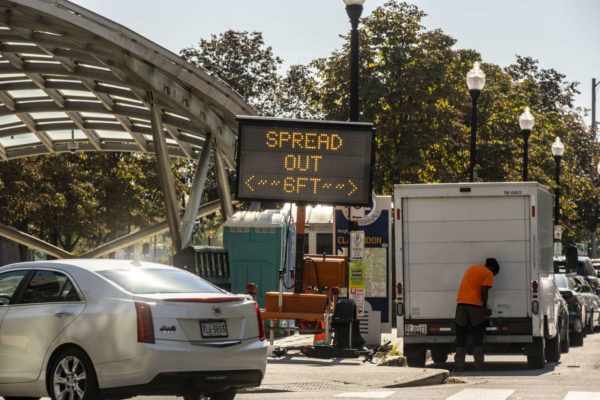 As the summer approached with lockdowns in place, many cities, including D.C. and Alexandria, closed some streets to drivers and expanded walking and biking options.

Arlington did not, although many residents supported the idea, according to an ARLnow poll from April that found support for closing streets among 80% of respondents.

The county did not close roads primarily because it lacked materials and manpower, Director of Transportation Dennis Leach told the Arlington Bicycle Advisory Committee during its meeting on Monday. The explanations angered members.

Gillian Burgess, the former chair of the committee, told ARLnow that the meeting was “frustrating.” Members were told to advocate for increased funding to close streets and to attend other meetings, which she said deflected the responsibility away from the department.

Burgess started championing the cause in March, when she rallied together people from various organizations to ask the County Manager for more space for non-drivers. Their efforts were unsuccessful.

Transportation and Operations Bureau Chief Hui Wang told ARLnow that the department looked at the roads people suggested for closures, considering safety, feasibility, resources and the opinions of neighboring businesses and residents.

“We had a hard time to find a good piece of road that was suitable for the treatment that was suggested,” she said.

Obstacles included frequent bus stops and curb cuts, pick-up and drop-off zones next to businesses and access for emergency responders, Wang said. Closing streets, she said, is not as easy as just putting up a few signs.

Signs must meet national standards, for instance, while getting placed in safe spots, checked for damage and replaced when necessary, she said. Safety requirements like these make the task difficult.

Wang said the pandemic revealed what her bureau lacked in order to respond. Her team did manage to procure temporary outdoor seating areas within sidewalks, and closed some parking lanes to allow people to walk around the new outdoor dining areas, but does not have the resources for large-scale temporary pedestrian-only zones, she said.

Another factor in the action: questions of equity and whether closing streets in certain areas would benefit those hardest-hit by the pandemic.

Arlington successfully closed 0 streets, added 0 bike lanes (except those already planned in the before times), and widened 0 sidewalks during the Covid-19 pandemic. Yes, we added some TOSAs, but those are incredibly limited. Yet, we're asking if transit we provide is equitable. https://t.co/8DSadBitDv

Burgess said she understood these reasons at the beginning of the pandemic. Eight months later, it is “super disappointing that Arlington can’t be creative, nimble or quick and can’t try something that would serve residents,” she said.

Arlington transportation officials have now turned their attention to Arlington Public Schools an an anticipated return to school for students. They are working to identify the best routes for walking and changing the timing of lights to make crossing the street safer.

Buses will operate at a lower capacity, meaning more parents may drive their kids when they could walk or bike instead, Burgess said. She said a silver lining of decreased busing may be a growing realization that Arlington should prioritize making streets more biking- and walking-friendly.