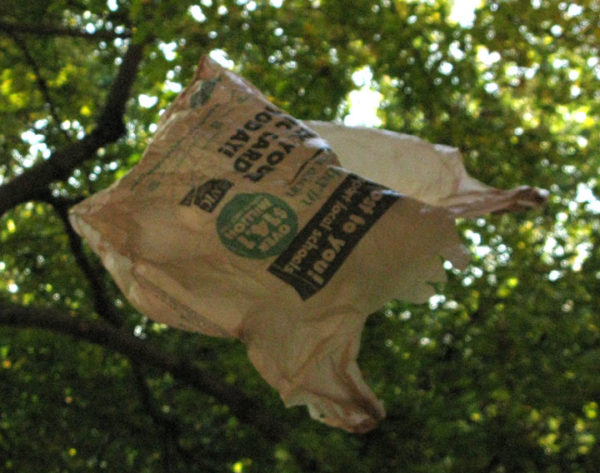 Members of the Arlington County Board say that before they enact a local tax on plastic bags, they need time to identify and avoid the unintended consequences of one.

“The most vulnerable suffer the most from pollution and will suffer the most when we try to clean it up,” Board Chair Libby Garvey said during the County Board recessed meeting on Tuesday afternoon. “We’re going to try and do it right and be aware of the pitfalls, and there are a lot.”

In March, the Virginia General Assembly passed SB11, a bill that allows municipalities to collect a tax of five cents on disposable bags. Gov. Ralph Northam signed the bill into law on April 10. The proceeds of the tax would be used for environmental purposes.

“Based upon revenue generated from similar taxes in the District of Columbia and Montgomery, Maryland, the tax proposed in this bill could potentially generate aggregate local revenues between $20.8 million and $24.9 million annually” statewide, the bill’s impact statement said.

The 5-cent tax has the support of EcoAction Arlington, an environmental advocacy group, which launched a petition this fall. The group aims to have 1,500 signatures by the November Arlington County Board meeting.

“Presently, 471 local ordinances have been adopted in cities and counties across 28 states,” the petition said. “We believe Arlington should be the next county to take this important step forward.”

Staff have been and are working through policy issues and how to engage Arlingtonians, with a specific focus on how this would work during the pandemic, said Deputy County Manager Michelle Cowan.

A proposed timeline would start with a “robust” engagement of stakeholders in January, she said. An ordinance could be drafted in February. The law requires it be adopted by April 1 to be effective on July 1, Cowan said.

County Board Member Christian Dorsey said April may be too early, and wants to hold off until the community is optimistic that the pandemic is over. He said he worries that the tax would hurt the vulnerable and low-income residents of Arlington, “during a time when we are all hoping to prioritize getting them safely and healthily through the pandemic.”

Board Member Takis Karantonis encouraged county staff to include the most vulnerable in the county’s outreach efforts.

“It’s a very good point to think about how to introduce multi-use bags and create a culture that helps those who are the most vulnerable,” he said.

Members Matt de Ferranti and Katie Cristol also wanted to pump the brakes and review the potential tax in February or March when they have more information.

“I know there is a strong desire to see this plastic bag tax in effect on Jan. 1, and I associate myself with that impatience to make these big strides on environmental protection,” Cristol said, before adding that additional time is needed for a more thoughtful and equitable approach.

In the same meeting, Dorsey told members about new goals to reduce regional greenhouse gas emissions by 2030, set by the Metropolitan Washington Council of Governments. The association adopted a plan in 2008 to reduce greenhouse emissions by 80% from the baseline in 2005 by 2050, Dorsey said.

“There was a significant decrease at the start, but that has resulted in a plateau over the last several years,” he said.

Pushing through the plateau will require retrofitting homes, ensuring new home construction is energy efficient and moving buses and passenger vehicles toward zero-emissions, he said.