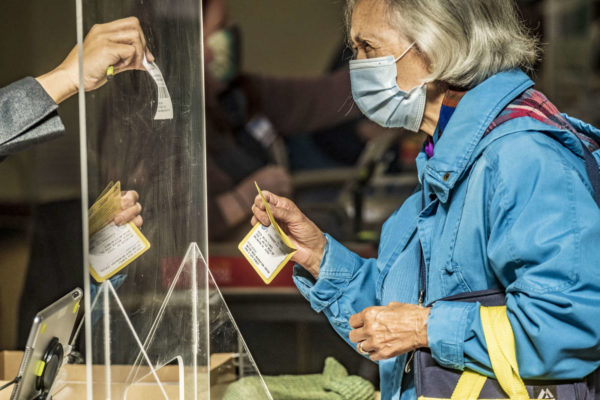 Despite record-setting levels of early and mail-in voting, the final 2020 general election turnout in Arlington slightly underperformed that of 2016.

Last week’s election set a local record in terms of votes cast, but a rise in population and voter registration meant that the final turnout figure was a few points below the 82% turnout from 2016.

“Absentee turnout this year was record-breaking, with more than 108,394 Arlingtonians (65.1% turnout) casting their ballots by mail, drop box, or in person before Election Day,” the press release continues. “With so many Arlingtonians voting before Nov. 3, turnout remained light throughout Election Day, with only 23,124 people voting (14% turnout).”

Mail-in voting accounted for 29% turnout — just under 50,000 votes — an unprecedented number, albeit not unexpected this year due to the pandemic. In the end, now-president-elect Joe Biden prevailed in Virginia and in Arlington, with 80.6% of the county’s vote to 17.1% for President Donald Trump.

Although the general election did not set turnout records, about 45% of registered voters cast ballots in the March presidential primary, held just before the pandemic prompted widespread lockdowns, exceeding the primary turnout from 2016. Biden received 48.3% of the Democratic primary vote in Arlington, well exceeding that of Elizabeth Warren (20.0%) and Bernie Sanders (18.8%).

County officials say there were “no reports of significant technical issues” at the polls last week, noting that more than 750 election officers and about 100 high school students helped to staff the county’s 54 voting precincts and the central absentee vote counting center.