The shops, which rely largely on foot traffic from Crystal City office workers, have been struggling during the pandemic. But with Amazon’s arrival spurring new development, some local groups have been brainstorming a new future for the half-mile corridor.

Last week, the best ideas were proclaimed winners of the “Underground Challenge,” developed by Livability 22202, a group that includes the Arlington Ridge, Aurora Highlands and Crystal City civic associations.

“The Underground Challenge was organized to spur creative thinking about the Crystal City Underground and its future with the change and new development now happening in Crystal City and National Landing,” said Livability 22202’s press release. The group said that subterranean shops are “much loved by local residents.”

The challenge was sponsored by JBG Smith, which owns the shopping center, and the National Landing Business Improvement District, which serves the Crystal City, Pentagon City and Potomac Yard neighborhoods. The three groups founded a working group to liven up the sparse hallways.

People submitted creative writing pieces, videos or business plans to revitalize the buildings, corridors and plazas that were built a half-century ago.

“Entrants celebrated their fondness for the underground, pointed out its quirks and features, and proposed new ideas for its future,” said the press release.

“There are myriad issues to be addressed, and I don’t have all the answers (and likely don’t know all the challenges),” Heath wrote. “What I do know is this: the Water Park may be the outdoor personification of our Crystal City urban village, but the Underground is its beating heart and circulatory system, literally and figuratively.”

Runners-up in the creative writing category included Neena Gupta’s “In Search of a Protagonist” and Matthew Mercado’s “Dr. Mercado’s Diagnosis.”

Kari Klaus won the video category with a vision of a Las Vegas-inspired Underground. 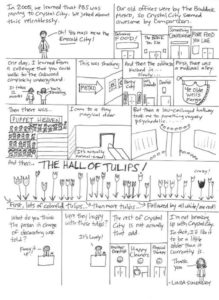 Videos from the runners-up Emma Benson and Eric Cassell offered “fond — and satirical — commentary on the existing Underground experience.”

Runners-up included Michael Hong, who suggested a Museum of Science Fiction and venues for live music, and John Chapin, who imagined security-related businesses settling into the Underground.

“The community’s robust level of engagement in the ‘Underground Challenge’ truly reflects their passion for great places and appetite for continuous reinvention,” said Tracy Sayegh Gabriel, the president and executive director of the National Landing BID, in a statement. “National Landing is fortunate to have such a committed community of residents focused on positive efforts that will improve the neighborhood for all.”

Livability 22202 said it plans to share ideas from the Challenge in future discussions about the underground.