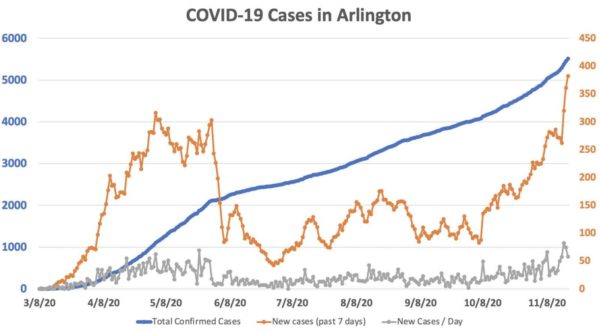 (Updated at 11:30 a.m.) For the third day in a row, Arlington’s daily coronavirus case average has risen to a new record.

In Arlington, 58 new cases were reported overnight, following 74 new cases on Tuesday and 82 new cases on Monday. The trailing seven-day total of new COVID cases is now 382, or nearly 55 per day, a new record. 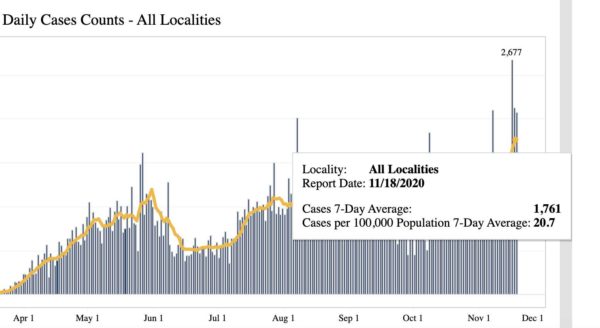 Arlington’s cumulative case count since the beginning of the pandemic is now above 5,500. It crossed the 5,000 mark only ten days ago.

The county’s test positivity rate has also ticked up, and currently stands at 7.1%. It was around 3.5-4.5% in September and October.

Hospitalizations, meanwhile, remain elevated but well below the levels seen this spring. Sixteen new hospitalizations have been reported among Arlington residents over the past week, according to Virginia Dept. of Health data.

During a presentation to the Arlington County Board on Tuesday, officials said that the virus is disproportionately affecting younger adults and the Hispanic community.

“The trend continues to illustrate the constant disproportionate burden for our Hispanic residents across the entire span of the pandemic,” said Aaron Miller, Arlington’s director of the Department of Public Safety Communications and Emergency Management. 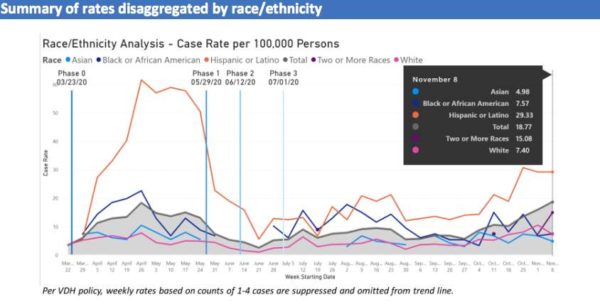 Eighteen to 29 year olds are breaking records for case numbers during the pandemic, with 28.38 cases per 100,000 reported last week.

“Since June, we have seen sustained increases and a disproportionate burden of illness that is higher than all other age groups,” Miller said. 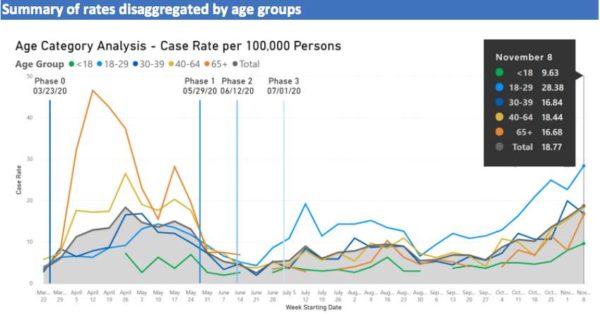 The County’s contact tracing has found that one third of Arlingtonians who test positive knowingly interacted with someone who was positive or showing symptoms of COVID-19, while nearly one in five report that they attended a large gathering.

“That increase in people gathering together flat out allows for germ spread, and it makes it easier for coronavirus cases to rise,” he said.

Arlingtonians are also setting new highs for testing rates. Since the pandemic started, 84,601 PCR tests have been reported to the department, with 4,500 coming over the last few weeks.

“That is the highest number reported to date,” Miller said.

Nationally, all 50 states are currently reporting rising cases, and while COVID-related deaths in the U.S. crossed the quarter-million mark today, case mortality rates are lower than in the spring.

Pfizer and Moderna, which developed another vaccine that has proven highly effective in trials, are aiming to have 20 million vaccine doses each available in the U.S. by late December, the Associated Press reports.