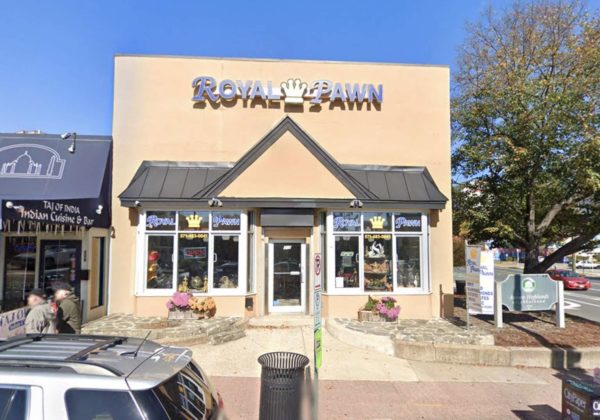 Royal Pawn in Crystal City was burglarized this week by a pair of thieves who smashed their way in and stole a number of valuables.

The burglary happened early Tuesday morning. Police were dispatched to the store at 507 23rd Street S. around 4 a.m.

“Upon arrival, it was determined that two suspects forced entry to a business, causing damage, and stole numerous items of value,” according to the Arlington County Police Department.

The suspects reportedly fled in a dark-colored Dodge Challenger.

Royal Pawn opened its 23rd Street location in Crystal City in 2017, replacing the former Grill Kabob restaurant. Alexander Rizer, vice president of the family-owned company — which some might recognize from its cable TV commercials that air during football games — said that he’s worried about a recent increase in crime.

“What it used to be before, we’d see Arlington PD going up and down the streets, everything was taken care of,” he explained. “Now we’re not seeing that as often anymore. Now we’re having to take measures into securing spaces much heavier.”

“We’ve made some drastic changes and it won’t be happening again, I can tell you that,” Rizer said of the burglary.

The store is currently “100% open” for business, he noted.

Jo DeVoe contributed to this report. Photo via Google Maps.