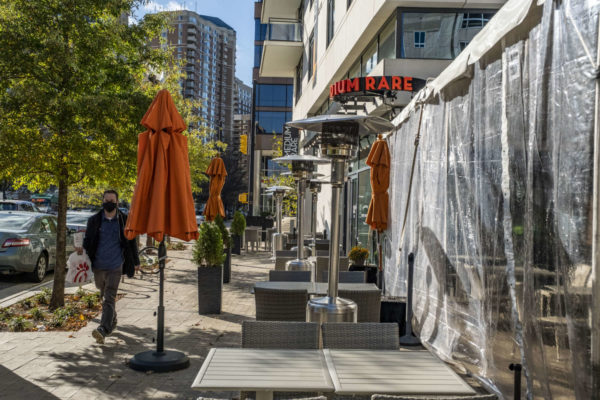 The County Board has granted restaurant and bar owners more leeway as to where they can set up and winterize outdoor seating.

Owners will now be able to set up temporary outdoor seating areas — or TOSAs — in common areas, such as plazas, following a vote during the recessed County Board meeting on Tuesday.

In May, when the County first established a program to allow TOSAs to respond to the pandemic, the seating on sidewalks and patios had to be associated with specific restaurants and bars.

The decision to give restaurants more space and flexibility is partly in response to a request from representatives of a plaza in Shirlington to open the space to outdoor seating for several nearby restaurants.

“Businesses have discovered another dimension of work in this enhanced environment,” County Board member Takis Karantonis said during the meeting. “I believe for the most part they are working very well, I’m very thankful for the enhancement before us today.”

This seating arrangement could be here to stay, County Manager Mark Schwartz told the board.

To keep this going post-pandemic, the County Board would have to codify it in the zoning ordinance, County Attorney Stephen MacIsaac said. This ordinance will last up to six months after the emergency is declared over.

The change comes as County officials encourage restaurants, which have set up tents and heaters outside the new permitting process, to go through official channels.

“We’re finding propane heaters used and stored under tents, and tents not being set up under TOSA,” which is not allowed, Fusarelli told the County Board. 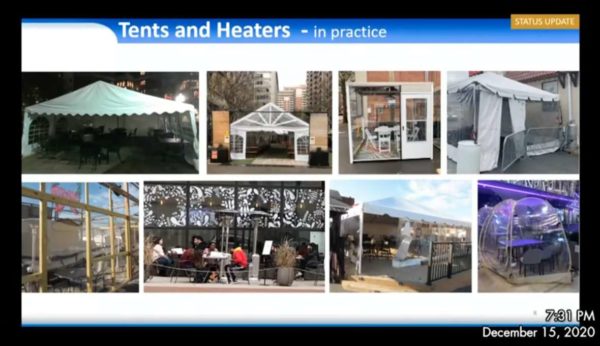 CPHD has received only a dozen tent requests through TOSA applications, which means owners may not be aware of the rules, or are going outside of them, Fusarelli said.

This spring, the County had 250 requests for outdoor dining “of some sort,” and 120 TOSA applications, Fusarelli said. Since the temporary program launched, his department has approved 93 TOSAs.

“We’re doing the best we can on our end to respond to requests,” Fusarelli said. “We approved the first applications late last week, and will approve more in the future.”

The change would especially help restaurants without space on their property to accommodate and winterize outdoor seating according to Virginia’s fire codes. Heaters have to be five feet from exits, awnings and tents, and only electric heaters are permitted under tents.

Medium Rare owner Mark Bucher, who said he has not heard back about his TOSA application, is still chafing against the restriction that prohibits propane heaters from being installed under tents.

He is doing it anyway, even though the Arlington County Fire Department has repeatedly asked the restaurant to turn the heaters off.

@ARLnowDOTcom @ArlingtonVA @ClarendonBros @Arlingtonfire This is simply inhumane. Not allowing outside heat whe it’s 40 degrees . Please talk to DC, MD and ALL other counties in VA. Your residents demand it , business needs it . @WTOP @washingtonpost #keeptheheat pic.twitter.com/lSJ2EdUA59

“We have to because people are freezing,” Bucher told ARLnow. “If I stop, and I don’t heat the tents, I’m out of business.”

The setup resembles the one at his D.C. location, where fire codes allow propane-heated tents.

ACFD Captain Gregg Karl acknowledged the perception that it is harder to winterize seating in Virginia, but said the County cannot make fire codes less restrictive than those of the Commonwealth.

“I was in D.C. and I saw things that wouldn’t fly in Virginia,” he told ARLnow. “The big issue is that we’re so close to D.C. and Maryland, but they’re both playing under a completely different set of rules.” 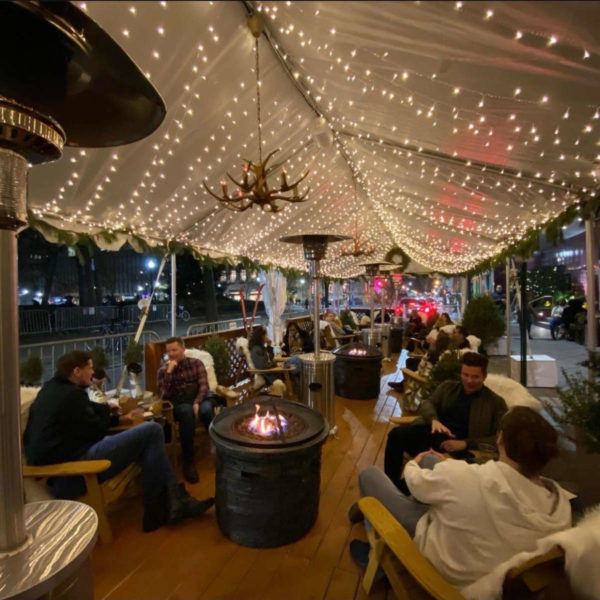 The department is offering code consults to ensure owners get and install the right heaters and has worked “with several restaurants” to find ways to install a variety of heaters, from diesel to kerosene, Karl said. As of Dec. 15, 42 restaurants have propane heating, with some still pending inspection.

Neighboring Fairfax County voted in October to relax regulations around tents and heaters. But Karl said what they actually voted to allow — electric heaters inside tents with sides on them — has always been permitted in Arlington County.

Each state adopts its own codes, and Virginia’s is based on an international code, he said.

“I do know from speaking with fire marshals in Northern Virginia that we are all in accord,” Karl said.