The popup, temporarily themed as a “Winter Wonderland” bar, started serving customers exactly one year after the old event and nightlife spot at 3185 Wilson Blvd closed on New Year’s Eve in 2019. Fire department personnel could be seen conducting final inspections inside the space on Wednesday, before the opening.

“The opening weekend was a huge success,” owner Mike Bramson said in an email. “The turnout was better than we expected as all tables were booked [or] sold out. Our guests really enjoyed the decorations, themed cocktails, projection wall, DJs and bands.”

This coming Thursday, Friday and Saturday, the multi-level popup bar and event venue will celebrate its official opening. A more detailed lineup of events, featuring a mix of DJs and bands, will be on the website by the end of the week, Bramson said.

“We also have a large projection wall where we can show some playoff [football] games,” he said. “We are already working on a Super Bowl event.” 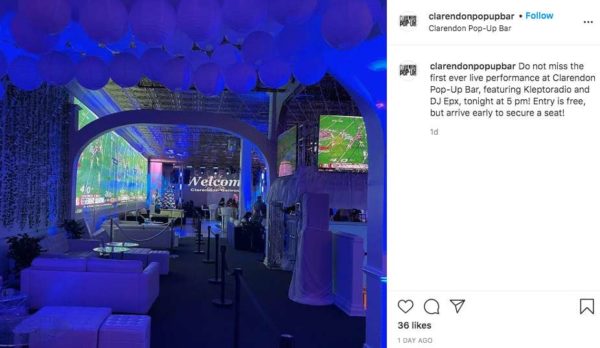 High-top tables are first-come, first-served, while the bar takes reservations via email for couches, Bramson said.

The County Board approved Clarendon Popup’s request for a live entertainment and dancing permit in mid-December on the condition that the owners abide by all local, state and federal COVID-19 regulations.

“The size of the space allows us to properly social distance and keep our patrons and staff safe while enjoying a fun atmosphere,” Bramson said.

“Typical internal delays” forced owners to postpone the popup’s opening from early December until the last weekend of the year, Bramson previously told ARLnow. As a result, the “Winter Wonderland” theme will stay through at least Jan. 30.

Bramson, a co-owner of The Lot — the popular outdoor beer garden a few blocks from the Ballroom — confirmed in October that Clarendon was getting a new, temporary nightlife spot in a familiar hangout.

The popup bar plans to operate 11 a.m. to 12 a.m., Sunday through Thursday and 11 a.m. to 1 a.m., Friday and Saturday, including the eve of all federal holidays.

END_OF_DOCUMENT_TOKEN_TO_BE_REPLACED

More Stories
Police Department Defends Officers Who Questioned Black PhotographerAging Right at Home: Tips and Resolutions if You’re Providing Care for a Loved One in 2021