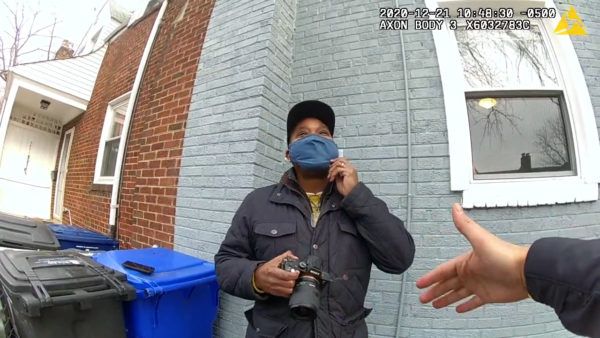 New video and audio is shedding additional light on the controversial encounter between Arlington police officers and a Black photographer in the Foxcroft Heights neighborhood.

Bodycam footage of the Dec. 21 encounter and audio of a neighbor’s call to police, which prompted the incident, were released as a result of a Freedom of Information Act request filed by the Arlington branch of the NAACP. The media was shared tonight with ARLnow.

During the call, an unidentified female neighbor tells police that the photographer, who was at the time sitting in his parked BMW, was taking photos of the gate to Joint Base Myer-Henderson Hall, as well as “neighbors and people that are walking by.”

“We confronted him and he just wouldn’t engage… he’s just sitting there taking pictures,” the caller says. “I’m not sure if that’s illegal but it’s kind of creepy.”

The caller later reports that the photographer was “smiling and walking down the street, taking more pictures,” and then “engaging with a lady,” adding that “they apparently know each other.” She also noted that he had a “camera with a large lens.”

The man in question was Marlon Crutchfield, a professional photographer who’s retired from the military. He was hired by a family on the block to take holiday photos.

In a Dec. 23 Facebook post, Crutchfield said he was confronted by a neighbor — apparently the caller’s husband — but declined to answer his questions.

“Over the years I’ve had several run-ins with nosy neighbors concerned that a Black man was parked in their neighborhood,” he wrote. ” Well… the other day I was in Arlington parked waiting for an appointment when a man came over and asked me if I needed any help, of course I didn’t. I informed the gentleman that I didn’t need any assistance. Honestly — I was offended. Every Black person  knows what this means.”

“After the gentleman didn’t get the response he expected, he reached out to a few other neighbors one of them called the police,” Crutchfield wrote.

Bodycam footage released by the Arlington County Police Department shows three ACPD officers and three military police officers responding to the scene after the call. One Arlington officer knocks on the door of the house in which Crutchfield was shooting photos and asks to speak with him.

(Arlington police had just implemented body-worn cameras the week before the encounter.)

During the four-minute encounter, Crutchfield insists that, contrary to what the “very nosy neighbor” told police, he was just holding his camera and wasn’t taking photos of the base. He briefly flashes the officer an ID card — implied to be a military ID card, but edited out of the video — and says he knows better than taking photos of the military base.

The officer asks the photographer, who is still holding his camera, to present identification.

“This is very racist, and you should know better,” Crutchfield says in response, refusing the request. Eventually, the homeowner also begins talking to officers, saying that “he’s with me” and agreeing that the call to police was “racist.”

The officer explained that he was following standard procedures for a report of someone photographing a military base, to which the homeowner replied that “we get it.”

“I think we just need to move on,” she said.

“Have a great day sir,” the officer says as he walks off the property without obtaining the ID.

Subsequently, the officer is shown talking to the military police officers. He shares the man’s information with them, obtained by running his license plate via a dashboard computer system, and repeatedly insists that Crutchfield’s accusation of the encounter being racist is baseless. Police would have responded to the call regardless of the photographer’s race, he says.

Internal emails obtained by the NAACP under FOIA show acting police chief Charles Penn, Arlington County Board Chair Libby Garvey, and County Manager Mark Schwartz, as well was other county officials, planning a public response to the incident over the Christmas holiday, after receiving a complaint from the NAACP.

“In order to ensure public safety within our community, officers have a duty to respond to dispatched call for service and fully investigate the circumstances surrounding them,” says a statement drafted by the department, which was to be released in the event of a media inquiry about the incident.

“We must work together to ensure police are notified of suspicious behaviors that represent a threat to the community while at the same time ensuring the focus remains on the behaviors of the person and nothing else,” the statement says.

As reported earlier today, the police department defended the professionalism of its officers, in response to a series of questions from ARLnow.

The Arlington NAACP, however, said that the call to police was racially-motivated and contained misleading information about Crutchfield photographing the base in order to provoke a police response.

“There was no ‘investigation,'” the organization said of the quick police response to the neighbor’s complaint. “ACPD should have started with the alleged witnesses before harassing a professional photographer and embarrassing him by pulling him out of the home where he was an invited guest and interrogating him in front of his client.”

The NAACP said police should investigate whether the caller’s report was false and, if so, refer it to the Commonwealth’s Attorney for possible prosecution.

Photography in a public area like a sidewalk is perfectly legal in most circumstances, but the police department said photographing the base could be a violation of federal law. Asked whether officers should be dispatched to “suspicious person” calls about someone taking photos — which happens with some regularity in Arlington — the department said they should.

“During this particular call for service, it was reported that the individual was taking photos of an area with posted signage prohibiting photography pursuant to 18 U.S. Code § 795,” said ACPD spokeswoman Kirby Clark. “While taking photos may ordinarily be permissible, circumstances may warrant conducting investigations on scene, speaking with reporting parties and other involved subjects, and evaluating all factors to determine whether criminal activity is occurring.”