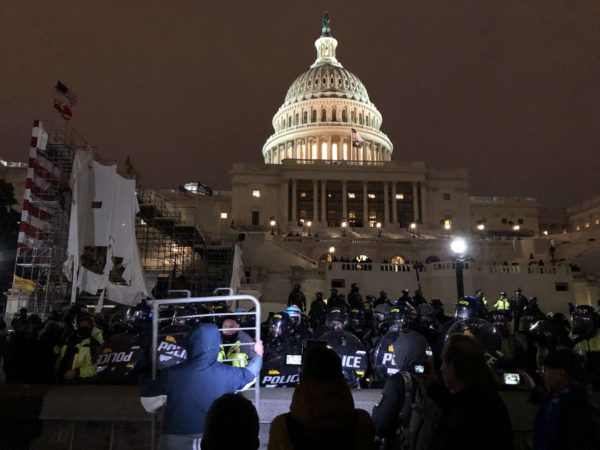 (Updated at 4:30 p.m.) Arlington County says it is “taking all necessary steps to ensure public safety” ahead of the Jan. 20 presidential inauguration.

In a statement issued this afternoon, County Board Chair Matt de Ferranti thanked the county police officers and firefighters dispatched into D.C. as mutual aid during last week’s pro-Trump storming of the U.S. Capitol, and assured residents that the county will “protect our community and help keep the peace in the coming days.”

Full statement is below.

My colleagues and I share the concerns that so many Arlingtonians have voiced in the wake of the storming of the Capitol last Wednesday. We are proud of the Arlington County police officers and firefighters who helped defend the Capitol and tended to the wounded. While we are grateful that no Arlington first responders or residents were injured, we mourn the loss of life, including the death of Capitol Hill Police Officer Brian Sicknick, who was mortally injured while defending the Capitol. Our officers who defended the Capitol and democracy deserve our profound gratitude. Everyone who participated in this violent assault on our Capitol must be held accountable.

Arlington will take all necessary legal steps to protect our community and help keep the peace in the coming days. I have full confidence that the County Manager and the Acting Police Chief are taking the steps necessary to keep Arlingtonians safe and appropriately assist with the safe transfer of power in a way that aligns with our community’s ideals and commitments.

The FBI is warning of a group potentially planning an armed uprising in the coming days by supporters of President Trump.

In a statement issued Monday afternoon, Virginia Gov. Ralph Northam joined Maryland Gov. Larry Hogan and D.C. Mayor Muriel Bowser in urging people to “not to come into Washington, D.C. for the Inauguration and to instead participate virtually.”