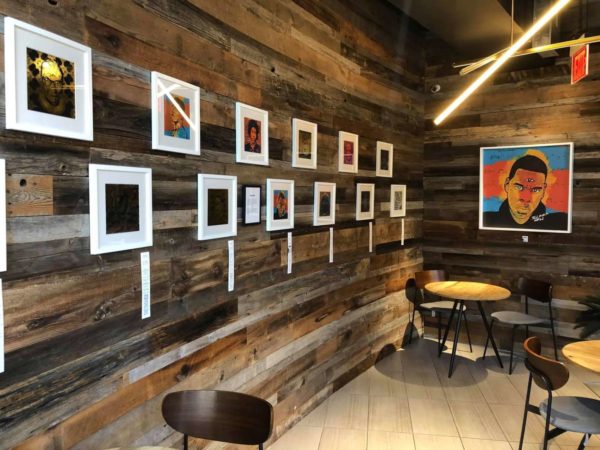 Local graphic designer and artist Hermes Marticio was only searching for a cup of coffee, but found an art studio instead.

It wasn’t Marticio’s first time walking into East West Coffee Wine in Clarendon (3101 Wilson Blvd) when he strolled inside in mid-November. Every time he noticed the art on the walls.

“It’s not curated. It’s just like they put it up there,” says Marticio.

So, he approached the owner, Mehmet Coskun, and asked if he could use a corner of the shop to create a pop-up art studio for his works. Coskun readily agreed and the two made a deal.

Marticio grew up in the Philippines, immigrated to California, and moved to Arlington about a decade ago for a job and to be closer to his mother. He is a father of one: a 19-year-old daughter.

Marticio says that this area provides good opportunities and schooling, which was also a big reason why his mom came to the United States.

“My mom grew up on a farm in the Philippines,” he says. “Something clicked in her head that wasn’t how [her] family was supposed to live.”

He says it was her “third eye” that guided her, a concept of having an invisible, perceptive eye — often in the middle of the forehead — that’s knowledgeable beyond normal sight.

His mother’s third eye is also inspiration for his art. Marticio designs illustrative portraits of pop icons, from Jay-Z to Ruth Bader Ginsburg to Muhammad Ali , many of which are depicted with a third eye.

“I feel like those icons have seen something that a regular person hasn’t seen,” says Marticio. “That’s why they became so successful.”

Like many folks, Marticio has had his job prospects fluctuate during the pandemic. When he lost his job earlier this year, he focused his energy and attention on creating art. He did get another full-time graphic designer job in July, but by then, he had created a whole lot.

Marticio has also embedded his art with augmented reality. Each work has a QR code, which if scanned with a phone using Artivie mobile app, reveals animation and other features.

“A lot of artwork can be static,” says Marticio. “But this adds elements to it.”

This augmented reality component is another variation on the “third eye,” adding a perspective not seen by the naked eye.

Coskun says he’s thrilled to have Marticio’s art in his Clarendon coffee shop.

“I’d rather have [Marticio’s] paintings and help him make some money, then [for me] go to IKEA to buy some paintings,” says Coskun. In fact, he’s got a few more inquiries from other local artists as well about putting their work on his shop’s walls.

“If there’s a space available, then why not?,” Coskun says, “It makes the walls look ten times better.”

Coskun says planning on letting artists do the same thing at his Rosslyn location, when it hopefully re-opens in the spring. The cafe at 1901 N. Moore Street, a building that is likely set for redevelopment, is currently closed due to the pandemic.

Marticio says his plan is to keep this particular collection up in Clarendon through the month of January. After that, he’s in discussion with another local artist about splitting the wall space.

All of the 12×12″ works are for sale for $75 (the bigger murals are “showpieces” and are not currently for sale). Marticio’s contact information and Venmo are below the works.

He says he’s sold a few already since he first put them up in early December, but all Marticio really wants are locals to appreciate his art work.

“Even if they do [steal] it, I think I’ll be happy because then I know they had an interest,” Marticio says.