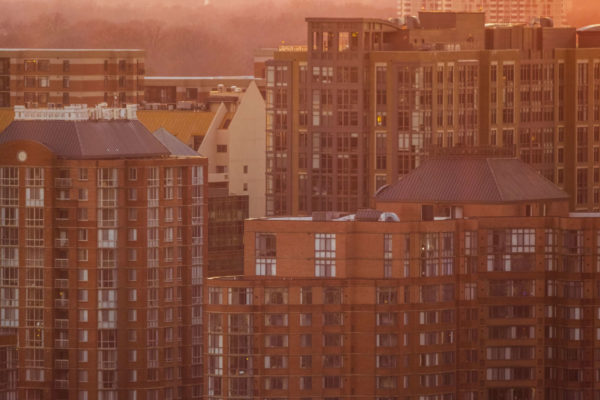 A recent national report has revealed that rents in Arlington have dropped by 14.8% since last March, according to an analysis of U.S. Census Bureau data by ApartmentList.com.

Between December and January, Arlington rents decreased by nearly 2.5%.

The median two-bedroom rent in the county is now $2,032, according to the report. However, Arlington still has the most expensive rents in the D.C. region, topping fellow close-in suburbs like Bethesda and Alexandria.

There’s one huge reason for the drop.

“It’s really tied to the economic carnage [from] the pandemic,” says Terry Clower, director of the Center for Regional Analysis at George Mason University. “Most of the jobs that we have lost have been in the hospitality services and retail sectors, which are typically disproportionately renters.”

Clower says parsing out data shows the pandemic has also caused behavioral changes in terms of renting. In general, high-rise units have seen a larger drop in demand than lower-rise properties, Clower notes.

“If part of your calculation of where you want to live at the moment is based on how dense the development is, how [crowded] it is in the elevator,” says Clower. “Then, you are less likely to live in a high rise.”

Ballston and Rosslyn, in particular, have seen an influx of these dense-living types of properties, mostly due to construction prior to the pandemic, though there are more in the pipeline.

What’s more, there’s lower desire at the moment to live in high-density areas, according to Clower. While rent prices have declined in Arlington, they’ve risen in further D.C. area ‘burbs.

“Areas like Fredericksburg, Virginia… or Charles County, Maryland, rents have increased,” says Clower. “You’re getting… that effect of fleeing the dense inner suburbs to the less dense outer suburbs.”

The need for more space, as well, has shifted some renters to exploring buying single family homes. Between a lack of housing inventory and rising home values in Arlington, says Clower, demand for residences in the outer suburbs have also exploded.

“Most households in our region are two-income earner households, especially families with school-age children,” says Clower. “Kids need a place and both [parents] need some place to work inside the house, preferably not the kitchen table.”

While rent decreases may be good for renters, it’s not good for property owners, developers, or even the county as a whole.

Clower says smaller landlords, those that only own a few properties, are not getting any break on mortgage payments, meaning decreasing rents impact their ability to pay their mortgage. In terms of the bigger developments, units are generating less revenue.

“They are less valuable in the market, which means that… the property taxes paid to local governments should be reduced as well,” says Clower. “Because they’re less valuable and generating less income.”

Arlington County depends on these property taxes to balance its budget and provide services to residents. But the full impact of all of this may not be seen until further into the future.

“The fiscal and economic down side of this pandemic is going to last well beyond… when we start getting the pandemic under control through the vaccinations,” says Clower.

Right now, it just may be a great moment to rent in Arlington. Clower says we can probably expect a continued slight dip in rents, but the big drop-off probably has already happened with vaccinations starting to happen.

“If you are looking for a good deal and prefer to be a renter,” says Clower, “it’s probably a good time to lock in a relatively long term lease.”