The Arlington County Board is slated to review plans for two residential towers at 1820 N. Fort Myer Drive that include substantial affordable housing contributions.

The proposal from Arlington-based Snell Properties would replace the Ames Center office building across from the Rosslyn Metro station. A south tower will abut the Hyatt Centric hotel and a north tower will surround the existing Arlington Temple United Methodist Church and Sunoco gas station, dubbed “Our Lady of Exxon.”

Although the church and gas station will be “redeveloped in place,” the skywalks — which provide an elevated pedestrian connection to the Metro station — will be demolished, according to the County.

Along with plans for the Holiday Inn and the RCA building, the proposal from Snell will further change Rosslyn’s skyline, demolishing the existing building, formerly occupied by the Art Institute of Washington.

The proposed towers, 30 and 31 stories tall, include 740 multifamily units and about 10,146 square feet of retail space. Up to 225 of the residential units may devoted to an interim hotel use, while the apartments are leased.

In a report, staff highlighted the affordable housing units in the building, committed as such for the next 30 years.

“The Rosslyn Coordinated Redevelopment District area, where this project is located, is one of the most expensive rental markets in the County,” staff said. “There are currently no [committed affordable units] within the RCRD.”

Twenty-four one- and two-bedroom units will be reserved for households making up to 80% of the Area Median Income.

Typically, such units are reserved for those who make up to 60% AMI, but staff said Rosslyn is so expensive that reserving units for up to 80% AMI “will better leverage the community benefits value while providing much-needed affordability directly in this area.”

Snell Properties is also committing nearly $2.5 million in cash toward affordable housing. The County said this sum could create about 29 units in future developments that are affordable for households earning up to 60% of the Area Median Income.

The project additionally includes a $5 million cash contribution for the Fort Myer Drive tunnel project, which includes plans to convert the road into a two-way street, remove the tunnel, widen sidewalks and add protected bike lanes.

A cement plaza will separate the two towers and form one segment of a planned pedestrian pathway that County planners call the “18th Street Corridor.” This street-level walkway will replace the existing, elevated passages. Mid-block crosswalks will join the plaza to 18th Street N.

Those who participated in community engagement from July and September “were universally in support of [the] removal of both skywalks,” staff said. 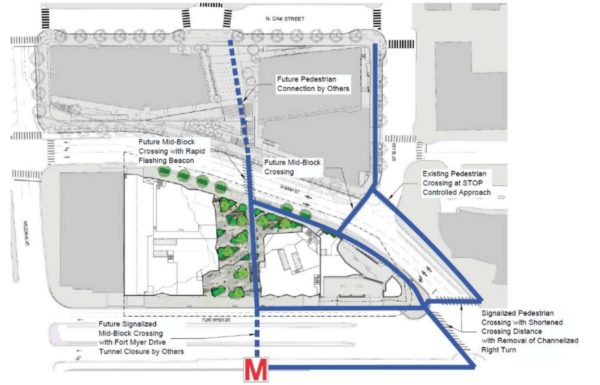 The County said “there are no outstanding community issues” but the mechanical penthouse roof and elevators may block or hurt the view of D.C. from the Central Place Observation Deck.

The County Board is expected to review the project at its Saturday meeting.

END_OF_DOCUMENT_TOKEN_TO_BE_REPLACED

More Stories
Biz Talk: Arlington’s Innovation Economy Had Notable Year Despite PandemicRents Have Dropped By Nearly 15% in Arlington Since March