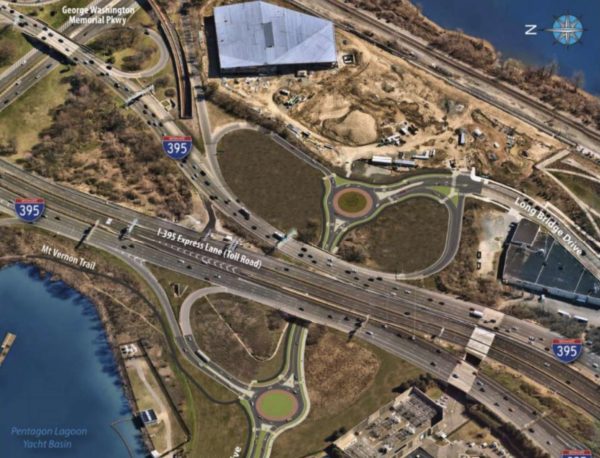 A number of major changes are coming to Boundary Channel Drive and the I-395 interchange near Crystal City.

The modifications include a shared-use walkway, pedestrian and bicycle access to the yet-to-open Long Bridge aquatics center, and reduction of four lanes to two.

On Saturday, the Arlington County Board voted to endorse the $20.4 million Virginia Department of Transportation project. It was part of the consent agenda, meaning they are non-controversial and can be acted upon by a single vote.

“We’ve long sought these improvements,” said County Board Chair Matt de Ferranti at the meeting. “They will reconfigure the interchange that you see to make it work a lot better and safer for everyone.”

Major components include adding roundabouts on each side, as well as building a 12 foot shared path that connects to the Mount Vernon Trail, the Long Bridge Park esplanade, and a new loop that goes around the aquatics center. Also along Boundary Channel Drive, there’ll be 8 foot wide sidewalks, landscaping, crosswalks, and street lighting.

A public hearing was held in November where, according to the county report, the public “expressed strong support for the project.”

Much of the feedback revolved around the shared-use path, making sure it was wide enough to accommodate both pedestrians and bicyclists safely. There were also a number of comments about the crosswalks and proposed safety measures.

The project is funded by a combination of state, federal, regional, and county money. Construction is expected to start in spring 2022 and be completed in fall 2023.

Construction of the Long Bridge Park Fitness and Aquatic Center, meanwhile, is still expected wrap up later this year, according to the county website. The upcoming FY 2022 county budget will decide when it ultimately opens to the public.