For Jeff Grass, CEO and Chairman of Ballston-based startup HUNGRY, a food distribution event in Arlington yesterday (Wednesday) had a bittersweet flavor to it.

While the company was able to prepare 6,000 hot meals for people in need at a drive-thru food distribution event at Central United Methodist Church (4201 Fairfax Drive) near its headquarters, it’s also a painful reminder that nearly one year after a global pandemic began, many Americans face a food accessibility crisis.

“On the one hand, it makes you feel good to be able to do something and it was nice to see how appreciative people are,” Grass said, “but seeing so many people coming by and needing a free meal highlights just how big and prevalent the challenge is. We’re Arlington, one of the richest counties in the country, and yet so many people are in need of food assistance.”

The company was able to distribute most of the 6,000 prepared meals in an event that ran from 1:30-3 p.m., and the remaining couple hundred that were left over were given to a local shelter.

Grass said he didn’t have an estimate on how many people attended the food drive, saying “it was car after car,” but that the company mostly limited the meals to ten per vehicle. HUNGRY had no protocols set up to screen for income levels, saying that anyone who showed up the the event was considered in sufficient need of a meal.

The handful of nicer vehicles, Grass said, were also a reminder of how much the pandemic had turned some lives upside down.

“I didn’t feel like it was up to us to challenge people,” Grass said. “Some people did drive up in nice vehicles, but everybody’s got their own challenges and stories, and everybody seemed to really appreciate it.”

The food distribution events had the added benefit of supporting the local chefs using the platform, particularly catering chefs who were some of the earliest victims of local business impacts.

“We’re in late January, past the holidays, it felt like the right time to do it,” Grass said.

It was the second major food donation initiative in January for the company. The first was a food delivery operation last week to National Guard troops posted in D.C. for presidential inauguration security following the riot at the Capitol earlier this month.

“The National Guard [distribution] came about through relationship established through a pop-up,” Grass said. “We ended up tapping into a couple different partners to help with food production. The Guard also helped, provided troops to help with pulling it all together and distributing the food.” 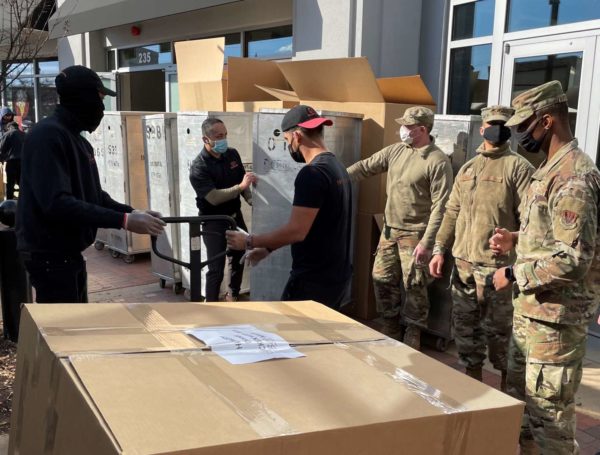 “One of the air wings for the Guard on-site helping us was who we had the most exposure with,” Grass said. “There were Guards in from all over the country and some that were local, like from Virginia and Maryland. The logistics of getting it in and out of the city was a challenge, because it was all on lockdown.”

The distributions events come after a year of the venture- and celebrity-funded company — like many other hospitality businesses in the area — pivoting to adapt to the new realities, while acquiring other catering companies and launching a partnership with the Nationals.

“The core of the business — event food and catering — that’s been hit just like the rest of the industry quite hard,” Grass said. “It remains at a very depressed level. We’ve been fortunate, and we’ve been able to pivot and launch three new businesses that have grown quickly. We wound up doubling sales last year, despite the challenges. We’re feeling really fortunate because of that.”