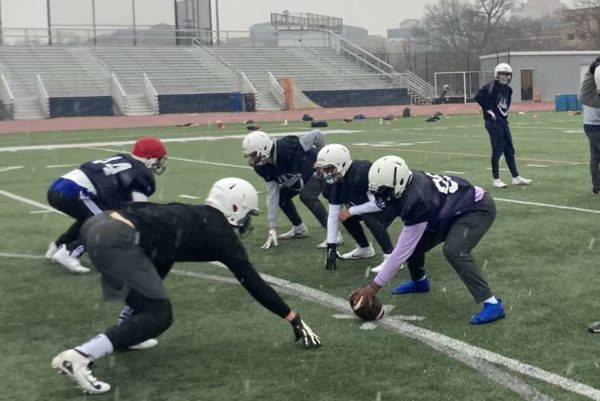 A belated 2020 high school football season is getting underway, but a number of Arlington Public Schools parents are awaiting a plan permitting limited spectators.

Arlington Public Schools football players had their first official practice on Feb. 4 ahead of their first games on Monday, Feb. 22 — yes, high school football on a Monday night — but so far, there is no word on whether people can attend their games.

“Staff are working on these plans now,” APS spokesman Frank Bellavia told ARLnow in an email.

Yorktown football parent Diane Boyle said in an email that she is hoping a plan for spectators will be announced at the upcoming School Board meeting on Thursday, Feb. 18.

“The stands are rarely at capacity even in non-pandemic times,” Boyle said. “I’m certain we can safely have limited spectators, and hopeful APS announces a workable plan soon.”

socially distant, but ready!!! even the neighbors are excited for Warrior Football!! pic.twitter.com/xSLScEmGNP

Boyle is one of nearly 150 parents who have written to APS, urging the school system to allow two masked, socially distanced spectators per player. Northam allowed this ratio for outdoor sports in a December executive order that also stipulates capacity cannot exceed 30% of a venue.

The Yorktown parents pleaded for action to allow spectators for the sake of students. More from their letter:

“Students’ need for this sort of athletic and emotional outlet is far more pressing during Covid than in ordinary times. Our students have already suffered months of deprivation, isolation, loss, and related mental health challenges. For many seniors on the team, this season will be their last opportunity to play organized football. In addition, many need sports to open the door to college admission and scholarships. In short, the players and coaches need — and have earned — the opportunity to play.”

In a similar letter from 70 Wakefield families, parents said APS has “the good fortune” of having football stadiums with ample capacity. They added that other recreational sports and other school systems are permitting spectators.

“Many of us have seen these rules successfully implemented for months with outdoor baseball, soccer, and travel and other sports,” their letter said.

Last November, APS reversed course on a decision not to allow winter sports after hearing from students and parents. All but two winter sports started their seasons in December.