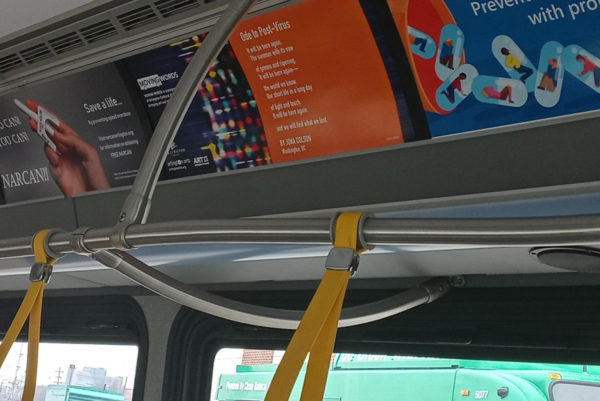 This column is sponsored by Arlington Arts/Arlington Cultural Affairs, a division of Arlington Economic Development.

Poetry in Arlington is quite literally on the move. The six winners of Arlington’s 22nd annual MOVING WORDS Poetry Competition have their poems printed on colorful placards displayed aboard Arlington Transit ARTBus vehicles, enlivening the ride for thousands of commuters.

The six winning poets were juried by Arlington’s 2nd Poet Laureate, Holly Karapetkova, who also will have a poem displayed. The winners were chosen from a field of 211 poems submitted by 85 poets from the D.C. area. Printed on colorful placards and displayed prominently inside Arlington Transit’s ART Buses between February and September, their poems will be seen by thousands of riders. Each winner also will receive a $250 honorarium.

“This is like a new beginning,” said winner Rana Jaafar Yaseen, who is a published poet and TV host in her native Iraq. “I challenged myself to write in English, and this is my first work since leaving an abusive marriage last year. I see it as ‘a sign’ to get involved again in the creative world that I adore.”

Designed to promote the work of local writers and make poetry a part of daily life for commuters in Northern Virginia, the MOVING WORDS Program was launched in 1999 during National Poetry Month. It was conceived by award-winning poet and literary historian Kim Roberts (founder of Beltway Poetry Quarterly), the then Literary Program Coordinator for Arlington Cultural Affairs.

Originally held in partnership with Metrobus/WMATA, MOVING WORDS launched a new partnership with Arlington Transit for its 16th year. This complements another ongoing Arlington Arts program, Art on the ART Bus, which places original artwork by area artists inside select ART Buses. A parallel Student Competition is held in the fall as the culmination of the Pick a Poet project, a partnership between Arlington Cultural Affairs and the Arlington Public Schools Humanities Project, which places professional poets in APS classrooms.

Jona Colson is the winner of the 2018 Jean Feldman Poetry Prize from the Washington Writers’ Publishing House for his poetry collection, Said Through Glass. He is also the co-editor of This Is What America Looks Like: Poetry and Fiction from D.C., Maryland and Virginia (2021). He is an associate professor of ESL at Montgomery College in Maryland and lives in Washington, D.C.

May-Mei Lee is a native Washingtonian currently residing in Virginia. She has written in a variety of forms but shunned poetry until 2020 when her attention span turned into the size of a pea. After her haiku was published by the Golden Triangle BID and displayed in downtown D.C., May-Mei’s making it a mission to splash her words in public spaces all across the D.C. region.

Lori Rottenberg has lived in Arlington since 1987 and works as a writing instructor for international students at George Mason University. She has published in such journals as Artemis, Potomac Review, and Poetica, and in anthologies by Paycock Press, Telling Our Stories Press, and Chuffed Buff Books. She’s been a visiting poet in the Arlington Public Schools Pick-a-Poet program since 2007.

Michele L. Simms-Burton is a writer living in Alexandria. She has made northern Virginia her home since 1991, except for when she was an English professor at the University of Michigan. Michele is a graduate of the George Washington University.

Rana Jaafar Yaseen is an award-winning poet, artist and TV personality who came to the U.S. in 2013. She has published seven books of poetry and short fiction in the Middle East. She has more than 10 years of television production experience, including writing, producing and presenting. All her work has been involved in the human rights movement to support peace, dignity and healing. This is her first poetry publication in English.