Recent Yorktown High School graduate Eva Gary is bringing the magic of princesses, princes and superheroes to kids — from a safe distance and over Zoom.

At the height of the pandemic, Gary, a lifelong performer and musical theater lover, decided to defer college for a year. She wanted to re-apply to competitive musical theater programs that she could not get into and wait until more schools and classes are in-person.

With the extra time she had, she started Princess Wish Parties, granting the wishes of kids who want to see their favorite fairy tale characters.

Over the last year, Gary and her squad of characters have visited virtual art parties, events for school pods, and drive-up parties. The dance, do crafts, play games and perform sing-a-longs with kids.

“I love working with kids, and performing, and this is the most magical combination of those two things, literally,” she said. 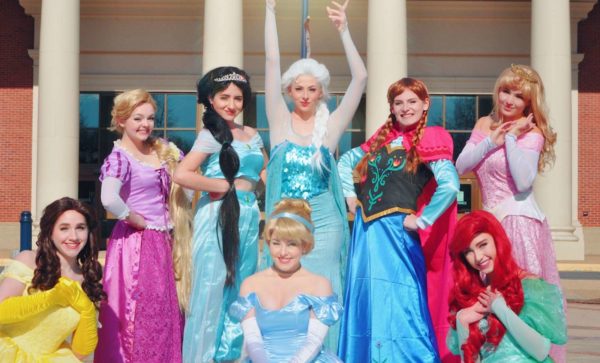 Gary started “princessing” for other companies as a sophomore, saying it was the perfect job for a teen who needed improvisation practice and had experience working with kids. She took a break from it to apply for college, but when she ultimately decided to put college off for one year, she picked it back up.

Although she was skeptical of the first socially distanced party she attended, Gary said the experience did not change much: She still could believably embody a princess character, sing, dance and form connections with the kids.

Bolstered by the positive experience and encouraged by her mom, Gary took steps toward launching a princess company. She found second-hand “Snow Queen,” “Mermaid Princess” and “Rapunzel” costumes and wigs — these companies are not affiliated with Disney, for the record — and tested them on neighborhood kids who she said are in “the princess stage.”

“The girls believed it and were so excited about it,” she said. “That was when I realized I can do this. Having had a little bit of experience as a performer, I knew I needed to get my head around the business side, but performing would be the same.”

Since then, she has virtually auditioned and hired actors, many of whom she knew from other “princessing” gigs and the musical theater community. She has quickly added on more princesses and expanded her offerings to include princes and superheroes.

“Every second of free time is spent on this company and recently, applying for schools,” she said.

“I think I’ve grown immensely as a princess performer from my sophomore year until now,” she said, adding that she also has to “be prepared to remind their kid to not put dirt in their mouth — in a friendly, princessy way.”

Now that the company has taken off, she said she plans to manage the company and hire actors from a distance during college, and delegate the logistics of handling parties to one of her younger sisters.

“It’s been harder than I expected, but I could spend every waking moment working on this and I would be happy,” she said

END_OF_DOCUMENT_TOKEN_TO_BE_REPLACED

More Stories
EXCLUSIVE: While the Capitol Was Stormed, A Group of Men Gathered Near the Marine Corps War MemorialFund Your Security-Related Degree With Scholarships From Diana Davis Spencer Foundation