After a turbulent two years, a Ballston-based weightless flight company named ZERO-G is once again ready for take-off.

Founded in 1995, ZERO-G chartered its first specially modified Boeing 727 boasting a “microgravity experience” in 2004, and has since hosted scientists and celebrities from Stephen Hawking and Buzz Aldrin to Kate Upton and Martha Stewart. Early investors and riders included Tesla founder Elon Musk and Sergey Brin, the co-founder of Google. ZERO-G has also conducted 211 research missions on its Federal Aviation Administration-approved planes, leading to major advances in multiple industries.

“Our goal is to provide the most accessible, most unique extraordinary experience that someone could have — literally, floating like an astronaut in ZERO-G — while being able to support growing research in microgravity,” Gohd said. 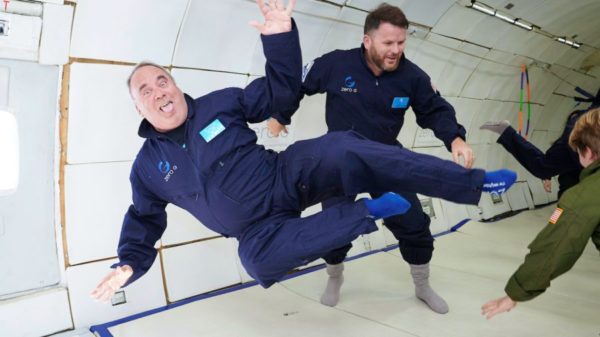 The upward trajectory came to a halt in 2019, when the company had major issues that kept the planes grounded, according to the CEO. The financial distress was so extreme that the company could not make payroll and in November, the previous CEO resigned and Gohd took the helm.

The new CEO raised a “rescue round” of funding, began charting a new course for the company, and watched the first plane of his tenure take flight in late January 2020. But one month later, the research staff started talking to him about the coronavirus.

“They said it would be much worse than people thought,” he said.

They were right: Flights were canceled through July 2020 and 90% of staff were furloughed.

But now, with the end of the pandemic in sight, the appetite for microgravity is skyrocketing, he said. ZERO-G resumed operations in August and sold out most flights, a trend that has continued this year.

For about $7,000, people can buy a seat on a flight or for $175,000, companies and groups can charter the entire plane. ZERO-G also makes money from studios shooting movies and commercials on the plane.

“There’s nothing that compares to what we do,” Gohd said.

With the funding he started raising in August, the CEO envisions buying a plane or two to meet this rising demand. The funding will also support research, which he said is the fastest-growing sector of ZERO-G’s operations because of renewed interest in space.

ZERO-G works with NASA and a number of universities to run experiments in microgravity, to see how fluids move or to see how things react in Martian or lunar gravity, both of which ZERO-G can simulate. Outside of ZERO-G, many researchers have no other way to do this work without incurring huge costs, he said.

“We’re the only way to provide an interactive platform for researchers,” he said.

Rock Mountain Capital founder, David Stonehill, now a board member for ZERO-G, commended Gohd for revitalizing the company and credited him for its growth.

“ZERO-G’s unique experience is valued by consumers, corporate customers, entertainment companies, and scientific research teams at NASA and beyond,” Stonehill said in a statement.