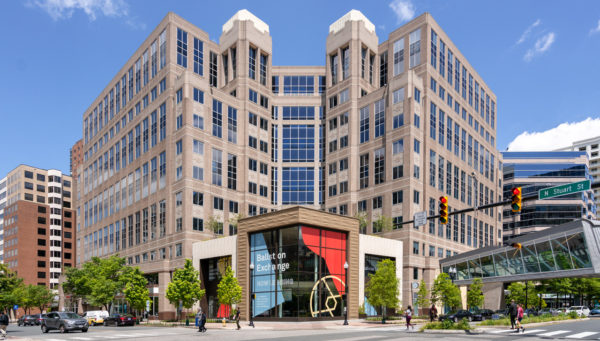 An new tenant in Ballston helps adults in need of a boost to establish foundational computer skills, ultimately expanding their career opportunities.

The new educational facility will be located in a 3,500 square foot space in the Ballston Exchange complex, across Wilson Blvd from Ballston Quarter mall. The Ballston Business Improvement District coordinated the agreement between Computer CORE and Jamestown, the building’s owner, a press release said.

Overall, Computer CORE has around 150 students, roughly 70 of which will be able to use the new space, according to a spokesperson. In terms of group demographics, around 70% of all enrolled students identify as women and 95% are people of color, according to the organization’s website.

Though the center is only set to remain in the Ballston Exchange through the end of 2020, there is a possibility to extend the agreement, according to a spokesperson.

The location was partially chosen because of its proximity to a Metro station and Ballston’s nearby amenities, Tina Leone, the Ballston BID’s CEO said in the press release.

Computer CORE also offers help with resume review, the job search process and interview prep. Program applicants must live in the Northern Virginia area, be at least 18 years old, be motivated to find a job and have demonstrated need for the classes, according to the website.

Currently, 350 other students are on a waiting list to attend classes, the spokesperson said.

An Arlington teen was named as a top 300 finalist in a national science project competition.

Eyuel Berhanu, a rising 9th grader who went to Thomas Jefferson Middle School, is one of the Top 300 MASTERS in the annual Broadcom MASTERS science fair, which is billed as the nation’s premier Science, Technology, Engineering and Math (STEM) competition for middle schoolers.

Eyuel, 14, studied mechanically stabilized earth (MSE) in his project. His uncle is a civil engineer, and through him Eyuel became interested in highway entrance ramps and the reinforced dirt that typically supports them.

For his project, Eyuel tested how adding different types of reinforcement to sand affected the sand’s strength.

“We had a little cube with the top open, and filled it with sand then a type of reinforcement,” Eyuel said. “The reinforcement is very strong, so we couldn’t just put weights on it. We had to stand on it, and the most we had was 300 pounds of weight on it and it didn’t crumble.”

Through research, Eyuel identified the most common types of MSE reinforcements used in construction, and tested each. Between metal strips, ladder metal, plastic geogrid and metal mesh, he found geogrid to be the most effective.

The project was based on a paper Eyuel wrote as a part of the Virginia Junior Academy of Science in late 2019. In January 2020, he submitted his work to Thomas Jefferson’s school science fair, and won first prize.

This advanced him to the Northern Virginia regional science fair, where Eyuel placed in the top 10% of competitors and was nominated to Broadcom MASTERS.

From there, he was selected to the top 300 from an applicant pool of 3,476 students. Eyuel said being chosen from such a large group was surreal, and he had trouble believing it when he first read the email telling him the news.

Eyuel said he pursued science projects out of his passion for STEM.

“My love for science and math [got me involved]. I want to be an engineer when I grow up, so that’s what got me into STEM and science projects like this,” Eyuel said.

When Eyuel was in 7th grade, he said he entered his middle school’s science fair and placed third, failing to qualify for regionals. Having now advanced from his school’s fair to the national stage, Eyuel’s dad, Teguwaze Berhanu, said he thinks persistence is a lesson that Eyuel has taken from his journey.

“He worked a lot and he spent a lot of time,” Berhanu said. “He tried in 7th grade and didn’t make it to regionals. And he tried again and did. He learned that by doing things again and again, he can achieve whatever he wants.”

Eyuel is starting as a freshman in Washington-Liberty High School’s International Baccalaureate (IB) program this school year.  He said he is looking forward to challenging himself in higher level math and science courses, and is excited to compete in science fairs at the high school level.

The five-minute segment, hosted by meteorologist Ginger Zee, highlighted a donation Amazon made to the nonprofit Rosie Riveters STEM program for girls.

…there are limitations to what the nonprofit can do in terms of free programming for girls without additional funding and resources. The cost of computers, batteries for robots, magnets and more of the supplies required to bring these inventive STEM projects to life add up quickly. In Arlington, the group said their waitlist is approximately 300 girls long.

To celebrate the season of giving, Amazon surprised the nonprofit live on “Good Morning America” by fulfilling their entire wish list with these essential supplies – computers, printers, batteries, magnets and much more — all to continue their mission.

Amazon, which is seeking approval for the first 2.1 million square foot phase of its permanent HQ2 in Pentagon City this weekend, has been particularly active in Arlington recently. The company made a large donation of “wish list” items to local affordable housing provider AHC Inc. earlier this week, while its Amazon Web Services arm has been helping to teach students at Drew Elementary coding this week for Computer Science Education Week.

More on the Abingdon broadcast via social media:

This morning, @GMA is showcasing Arlington’s Rosie Riveters at @AbingdonGIFT Rosie Riveters partners with @APSExtendedDay to bring STEM to girls across the county. pic.twitter.com/DaPWgL2Ep4