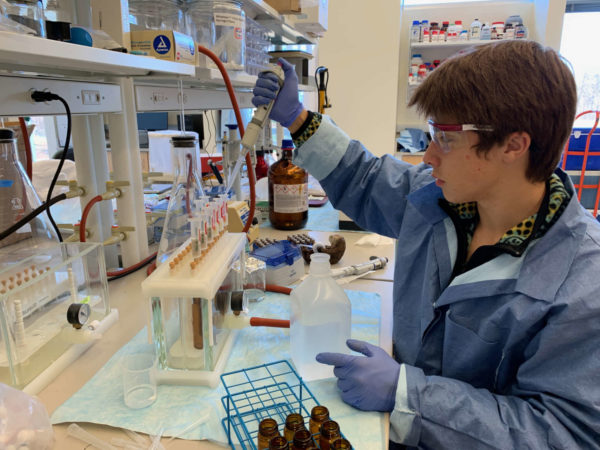 (Updated 5:45 p.m.) Washington-Liberty High School senior James Licato is trying to clean up micropollutants in the Potomac River, and he came up with a solution that vaulted him to the finals of a major science competition.

Licato is one of 40 finalists in the Society for Science’s Regeneron Science Talent Search 2021, the nation’s oldest science and math competition for high school seniors. He developed a sandy substance, using zeolites, that acts as a microscopic net, catching the micropollutants that wastewater treatment facilities miss.

Arlington Public Schools last had a senior — from Wakefield High School — make it to the finals in 1997. Washington-Liberty High School last had two students reach the final round in 1976, and have had four in total since 1942, said Society for Science spokeswoman Aparna Paul. Yorktown High School most recently had a finalist in 1996.

Licato credits the APS science staff with connecting him with extracurricular opportunities to present his work. His teachers also helped him work out the logistics of participating in science fairs and ordered materials he needed but could not obtain.

“The APS science department is awesome and has always been really supportive of everything I’ve done,” Licato said.

Licato said his area of research is a growing one, as more people become aware of the toxicity of these micropollutants. Many known pharmaceutical and personal care products (PPCPs) are toxic to aquatic organisms and perfluorinated alkyl substances (PFAs), found in non-stick and water-resistant coatings, can cause a host of diseases in humans, he said.

“The more we study, the more negative effects we find,” he said.

The benefit of his product is that it could be cheap and scalable because it could use the byproduct of coal fire plants, which normally sits in landfills, he said. It will need more testing and engineering work but Licato believes it has the potential to attract federal funding.

A Boy Scout and avid fisher, Licato has always been passionate about water quality and ecology. He won second place in the Earth and Environmental Sciences at the INTEL ISEF competition, also hosted by Society for Science, for his project removing an anti-diabetic medicine from wastewater.

That project introduced him to Thomas Huff, the Director of the Shared Research Instrumentation Facility at George Mason University, who specializes in researching river pollutants. Licato reached out to him because he needed to access a liquid chromatograph-tandem mass spectrometer.

At first, Huff was “highly skeptical,” but the then-sophomore won him over. He said Licato proved to be more adept with the machine than many senior undergraduate students.

Huff offered him an internship drawing and analyzing environmental samples at the Potomac Science Center in Woodbridge. He and a team of graduate researchers at George Mason University were determining the concentrations of PPCPs near wastewater treatment facilities for multiple grant projects.

Licato became a peer of the graduate student researchers, offering new ideas and mastering the software the team used, Huff said. He also developed methods of analyzing data that the other students and professors still use. The lab received a three-year contract to continue studying micropollutants.

“He was a consummate team member and morale booster,” the professor said. “He even taught tricks and tips to a full professor with 35 years of research experience.”