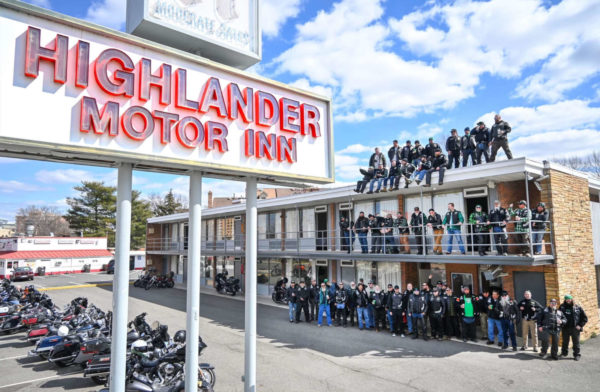 With the Highlander Motor Inn in its final days, the 57-year-old motel was paid one last visit over the weekend by long-time fans.

About 100 members of the motorcycle club Boozefighters rolled up on Saturday afternoon to pay their respects to the place they’ve stayed and partied at every Memorial Day weekend since 1992 while participating in Rolling Thunder.

The Boozefighters were first founded in 1946 by World War II veterans.

“[The Highlander] let us get away with stuff that other hotels wouldn’t have,” says Jeff Thompson, president of the Falls Church chapter of the Boozefighters. “Wonderful memories. It was important for us to say goodbye.”

In honor of the Boozefighters’ long-time patronage of the Arlington motel, they will be getting the iconic neon sign that has welcomed passersby on Wilson Blvd. The sign will come down next week, owner Billy Bayne confirms, at which point the club will take it to their museum in Fort Worth, Texas.

For decades over Memorial Day weekend, Highlander Motor Inn was the site of hundreds of motorcycles and veterans from around the country, barbequing and reminiscing in the parking lot.

Bayne — who also owns the Crystal City Restaurant gentlemen’s club — says the group rented the motel every year and it was a “big party,” which the hotel was happy to host.

Rolling Thunder ended its annual D.C. rally in 2019, and this year is set to meet at a New Jersey 4-H fairground. 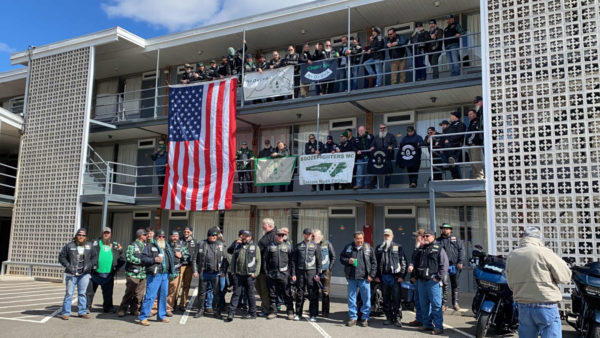 CVS was expected to take possession of the Highlander and begin demolition this month, but that has been delayed. According to Bayne, April 13 is now the new target date for this to happen.

Bayne’s family operated the motel since the early 1960s, before shuttering it earlier this year. Bayne still owns the land the motel sits on.

One of the Highlander’s last acts was as temporary COVID-related housing. In April 2020, Arlington’s Dept. of Human Services rented out the entire motel to provide quarantine and isolation space for low-income individuals living in overcrowded or congregate settings.

Beyond keeping the sign, members of the Boozefighters were allowed to spray paint and ride their bikes inside of the motel, as well as take a few other mementos.

“Only because it’s being torn down,” Jackie Bayne, Billy Bayne’s sister, told ARLnow. She dubbed the raucous sendoff “The Highlander Swan Song.”

Thompson says said he kept a room key, a key chain, and the number off of the door of the room he’s stayed in for the last 20 years.

“I’m very sad to see it go,” he said. “Billy and Jackie were such gracious hosts. “We wouldn’t have been able to do this at any other hotel.”