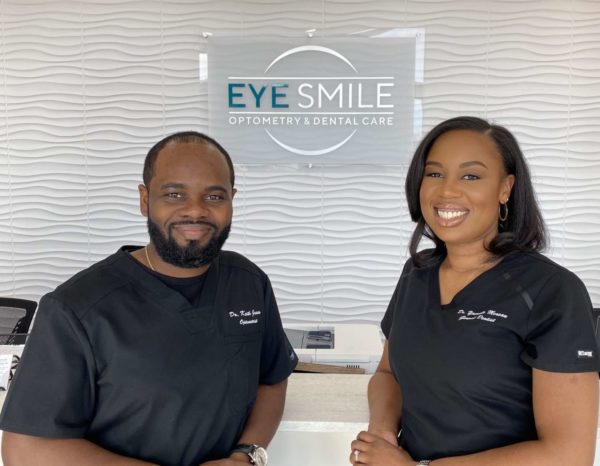 A veteran-owned optometry and dental practice on Columbia Pike has won a $15,000 grant from the PenFed Foundation.

The small, family-owned was awarded the grant because of its commitment “to serving its neighboring community, educating those that are under-represented and underserved, and leading as examples to future under-represented entrepreneurs,” according the PenFed Foundation website.

The foundation is a non-profit aimed at helping military members become financially stable. Its Veteran Entrepreneur Investment Program is specifically earmarked for Black veteran and active duty military entrepreneurs. Two other businesses also received $15,000: one in Maryland and another in Jacksonville, Florida.

James tells ARLnow that the couple is grateful for the grant and plans to use the money for business awareness, marketing, and increased staffing. They currently have three employees, plus the two doctors.

It wasn’t always destiny for the couple’s practice to land in Arlington. James and Moreau met in New York, when they were both in school. Then, James joined the Air Force and was stationed at Joint Base Andrews for three years.

While living in Alexandria, the pair realized the region could be a great place for a family practice.

“We just thought it was a fantastic community. We really want to focus on being a family practice,” says James. “We felt like it was just the perfect setting for us to flourish.”

Yes, they acknowledge, it is certainly unique that a dentist and optometrist share a practice.

“It’s definitely atypical,” James says with a chuckle. “But with both of us practicing health care, it’s definitely a good opportunity. It’s synergistic. We’re both practicing on the head which impacts overall health.”

The practice was initially slated to open in March 2020, James says, but was delayed due to the pandemic.

“We were planning this practice for two years,” James says. “So, that was extremely nerve-racking.”

It finally opened last May, right around the time when Virginia allowed dental practices to re-open.

“We try not to focus on slower days and get too excited about bigger days,” he says. “It’s definitely steady.”

The practice’s goals continue to be to provide personalized service and access to care in a section of Arlington where options can sometimes be limited.

“We saw a little space there for vision and dental that could be really central to that neighborhood and those families,” says James. “Being a part of that and increasing access to care is important to us.”

Read more →
More Stories
Luck of the Vaccinated: St. Patrick’s Day is Back (Sort Of)Return to School, Inequity Top of Mind for Arlington School Board Hopefuls