After several years of quietly building, a local IT management company — temporarily leaning into cybersecurity — is enjoying huge gains.

C3 Integrated Solutions, which helps government contractors use Microsoft cloud solutions, saw 172% growth over the last two years. According to the company, located in Rosslyn, those numbers make C3 the fastest-growing IT management company in Arlington.

Inc. Magazine ranked it the 69th fastest-growing company in the D.C. region for 2020 and ranked it among the top 2,000 companies nationally.

“I’ve been joking that it’s an overnight success 13 years in the making,” co-founder and president Bill Wootton said. And those numbers are for growth in 2019.

“2020 ended up being an even better year for us,” Wootton said. “Even with COVID-19, we had our best year ever last year, and this year, with some of the new services and solutions we’re about ready to roll out, we’re going to keep going in the same direction — up and up.”

C3 Integrated Solutions started a decade ago while Wootton and co-founder Kevin Lucier, an Arlington native, worked for cable and telecommunications company RCN. They wanted to give clients outside-the-box solutions and decided to start a company that would do just that.

When they took the plunge, however, they struggled to stay afloat in a mature industry crowded with similar companies. Three years in, Microsoft cloud services went online, which they saw as a lifeline.

Listening to some clients talk about the cloud, Wootton and Lucier saw a new opportunity and decided to jump ship. But there was one problem: neither had IT experience.

The duo hired people with the right expertise, including Kevin’s brother James — as well as long-time IT veteran Jason Tierney — and C3 Integrated Solutions was (re)born.

C3 focused on providing IT services to nearby companies, which, in Arlington, meant many of their clientele were defense contractors. That incidental relationship proved a huge boon to C3 a decade later when it found a new market to enter: cybersecurity. 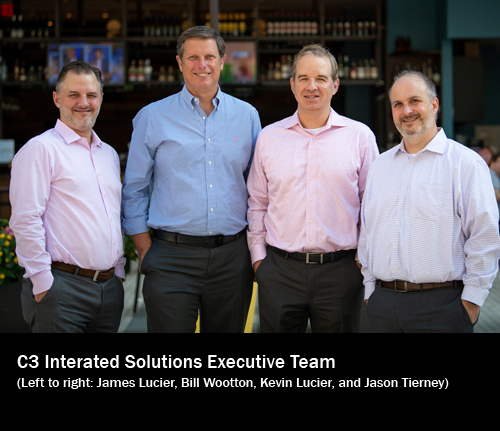 “We’ve been a mover in this particular solution set for three to four years now, and it’s just now starting to get mainstream recognition,” Wootton said. “We have a track record in an area where people are just realizing there’s a market shift.”

These regulations will take five years to roll out just for the defense industry, he said. The government is looking to expand these requirements to other departments, which means C3 is poised to ride this wave for a while.

But Wootton and Lucier will not be resting on their laurels. They aim to use this recognition and growth to stay ahead of their competition, launching new products while leaning on their Arlington location.

“Arlington is very pro-business,” Lucier said. “We’ve really enjoyed having our business headquartered in Arlington as a lot of the thought leadership in compliance and cybersecurity is here in Arlington.”

Lucier was born and raised in Northern Virginia and attended Washington-Lee (now Washington-Liberty) High School. When he and Wootton decided to start their business, he found the company’s office space in Rosslyn.

“I was pretty excited about how we were able to work with Arlington,” Lucier said, adding that the team “learned a lot” from staff at Arlington Economic Development and the Rosslyn Business Improvement District.

Wootton said C3 has drawn on Arlington for new hires and clients and benefits from the credibility the county’s name brings for far-flung clients who associate it with the Pentagon and the epicenter of government contracting.

Personally and professionally, the two see no reason to leave.