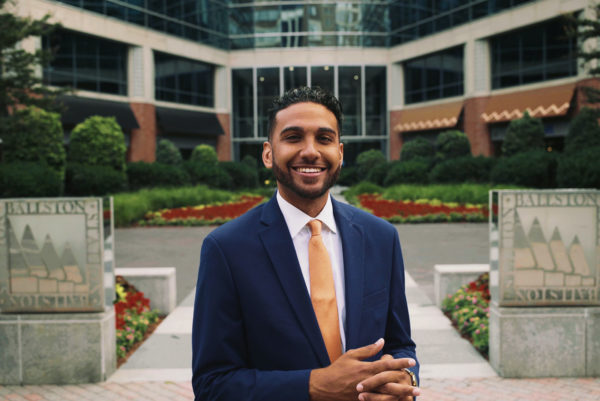 A paperwork snafu may prevent a local House of Delegates candidate, Matt Rogers, from going up against fellow Democrat Del. Patrick Hope (D-Arlington).

Rogers, who recently wrapped up 3.5 years serving as Chief of Staff for Sen. Dave Marsden (D-37) and is running to unseat Hope, reportedly failed to meet a filing deadline for two documents, according to the State Board of Elections.

As a result, he may not be on the June 8 Democratic primary ballot.

The challenger tells ARLnow that he mailed these documents to the state last June, but did not use certified mail, “which was a huge mistake.” Now, he is calling on the SBE to grant a deadline extension so these filings can be fixed.

“Having worked in these circles for a number of years, I was well-aware of the elements of filing and the responses from the State Board of Elections and their habits of communication with candidates — especially incumbents — having been on the receiving end of their entreaties,” he writes in a blog post.

The SBE met on March 31 to discuss candidates who requested an extension, including pastor and Richmond City Councilmember Mike Jones. According to Virginia law, such an extension would be applied to all candidates, not just those making the request, said David Nichols, the Elections Services Manager for the Department of Elections, during the meeting.

Ultimately, that board did not grant one, breaking with past decisions.

“I’ve made my position pretty clear on this matter: The failure of candidates to comply with statutory filing requirements places this board in a very unfair position,” SBE Chair Bob Brink, a former state legislator from Arlington, said during the meeting.

Brink said he has urged both the chairs of the state Democratic and Republican parties to ensure candidates comply with filing deadlines.

“I stressed that while the board had granted an extension of the filing deadline in the past, there was no assurance it would do so in the future,” Brink said.

🚨: I am officially requesting that @VAElect exercise its authority under VA § 24.2-503.

It's 2021. We should be making it easier for people to vote and run for office, not harder. pic.twitter.com/MOQd4VL3Ym

In Virginia, partisan candidates for elected office are required to file paperwork declaring their candidacy with their local political parties, Arlington Democrats Chair Jill Caiazzo said. Those parties must confirm with the Virginia Department of Elections which candidates have filed this paperwork.

“Arlington Democrats did that for all candidates who filed paperwork with the local Democratic party in connection with the upcoming election to represent the 47th District in the House of Delegates,” Caiazzo said.

As a courtesy, when Arlington Dems sent that notification to the department, the organization copied all candidates who filed paperwork with the local party, she said. But Rogers’ alleged misfiling is separate from the local process she described.

“Separately, candidates are required to file a different set of paperwork with the Department of Elections,” she said. “Local political parties play no role with respect to that separate filing requirement.”

Rogers is one of eight candidates who could be barred from being on the ballot due to paperwork problems.

During a Virginia Board of Elections meeting this week, the head of the Virginia Department of Elections told the three-person panel these candidates “just didn’t get it in on time.”

“At the end of the day, people didn’t get them in, I don’t think it was a lack of information sharing or knowledge sharing on our part,” Christopher Piper, the commissioner of the department, said.

The chair of the State Board of Elections was not immediately available to comment, nor was Del. Hope.

Rogers says that in breaking with past precedent, the board is disadvantaging Black candidates. Of the eight impacted by the decision, five are white and three — himself, Jones and Cydny Neville — are Black.

This is significant, he said, because the white candidates happen to be running in jurisdictions where they face no competition and can be made the candidate “by acclamation.”

“All of the five white candidates will make the ballot by that methodology. The three Black candidates, however, are in primaries,” he said. “The drastic departure from common practice by this three-member Board gives these three Black candidates running in primaries what amounts to the death penalty for their campaigns and deprives approximately 150,000 voters in these three districts the opportunity to have a say in who their next delegate is.”

The Virginia NAACP has taken up the issue as well, circulating a statement and a petition.

The candidate recently spoke out about his experience running for office as a Black man. Last week he published a Community Post — a form of sponsored content open to all community members — on ARLnow in which he described canvassing for his campaign last month, when a resident called the police on him.

“People who have the lived experience of the learned fear that strikes the heart at the sight of police need to be listened to and welcomed into the public square instead of… otherized,” said Rogers, whose electoral platform includes criminal justice reform.

An Arlington County Police Department spokeswoman confirmed that at around 1 p.m. on March 4, police were sent to the 5100 block of 9th Street N. — near Arlington Traditional Elementary School — to respond to a report of “a suspicious person” who the caller said was seen “walking into their backyard, trying to put flyers on their car.”

The incident was cleared without a police report being filed, she said.