The new requirements — and how they came about — have developers worried.

Arlington’s Department of Environmental Services will require developers to use tools such as water storage tanks to ensure new homes can retain at least 3 inches of rain, which will affect applications submitted after Sept. 13, 2021.

Currently, developers are only on the hook to improve the quality of water runoff, using rain gardens, planters, permeable driveways and tree cover.

In a statement, staff said the change “reflects future-focused and balanced responsiveness to a diverse customer base that includes downhill neighbors, property owners, and builders.”

But some developers who work in Arlington County says the changes blindsided them and they want more input. They predict significant potential cost increases to homeowners and argue that this shifts the burden onto individuals, rather than placing responsibility with neighborhoods or the county itself.

“There is broad concern with the roll-out of this,” said Yuri Sagatov of Sagatov Homes. “There are just a lot of questions and there aren’t a lot of answers. We’re all waiting to get more information from the county to see how the changes might impact properties.”

Staff said these changes were precipitated by the increase in heavy rainfall, the growing intensity of storms, and a sense among residents that the county is not doing enough to protect properties — particularly those that are downhill from development, from the runoff caused by new homes.

With the tanks, which appear to be above ground in photos, the goal is to retain rainwater during flash flooding events like that of July 8, 2019.

“Gravity detention tanks… promote a ‘slow it down and soak it in’ strategy to capture and release runoff slowly as a more robust and reliable way to handle intense rainfall,” says a DES memo.

It seems like a feasible alternative to more expensive underground systems, but the challenge will be blending them in aesthetically.

“They are talking about massive above ground cisterns,” the owner of one remodeling firm told ARLnow. “I would think neighbors would hate this. They’re going to be hideous.” 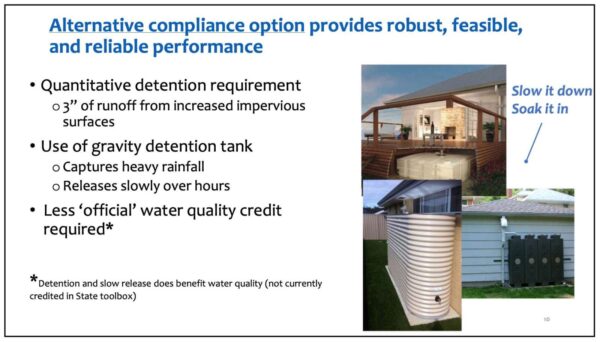 As for engaging developers during the process, county staff said enhancements to an existing program only require the county to consult with stakeholders. The county surveyed neighbors, home builders and engineers in 2019 and met with engineers early this year.

Andrew Moore, president of Arlington Designer Homes, said he “would have loved to have been in the room where they made this decision.”

“It could be a good policy — but if we haven’t had the ability to weigh in on it, it won’t be,” he added.

There will be engagement opportunities before the plans are published in the summer, county officials say. Staff did not answer what the cost for homeowners and developers could be in dollars, but did say the new requirements will add some “upfront effort during construction in exchange for a significant and lasting return on investment for the new homeowner and adjacent properties.”

Ultimately, builders want to be clued in and know exactly what the costs are, said Chad Hackmann, the regional partner of Alair Homes Arlington.

“We’re not trying to upset the apple cart — we’re trying to work with them,” he said. “Arlington is where every builder wants to work: Even if the economy is going south, it’s always decent here in Arlington.”

Despite worries about stormwater changes, homebuilders are cautiously optimistic about one proposed change, which aims to shorten the permitting process. Lengthy permit delays have been a sore subject among local developers for years.

Moore said such permits take up to 105 days to secure and he has tried and failed to make headway on improving these processes. County efforts to accelerate the review process are welcome, he said.

“We would love for it to become a shorter time frame,” he said. 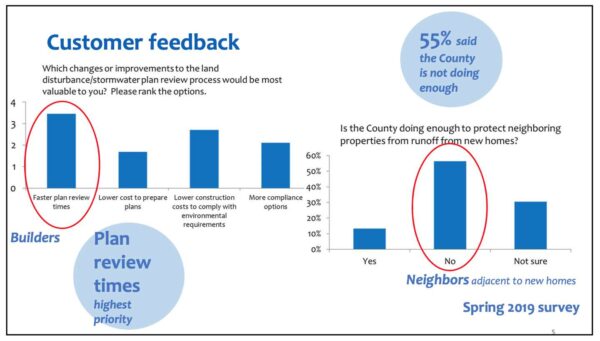