Don Zientara, owner of the legendary Inner Ear Studio — long the seat of Arlington’s punk rock scene — is at a crossroads.

This Saturday, Arlington County is set to consider buying two parcels of land near Shirlington — 2700 S. Nelson Street and 2701 S. Oakland Street — and the warehouse that sits on it, which houses Inner Ear.

The warehouse, which is also home to a Ben & Jerry’s catering outfit and part of the Arlington Food Assistance Center, is old and structurally worn down, he says, and county documents indicate it will likely be demolished to make way for an arts and industry district along Four Mile Run.

Arlington County previously announced its plans to one day buy the building, but Zientara said no specifics were laid out as to when he would have to relinquish his studio. Now, however, the county has set a deadline: Dec. 31, 2021.

“I could retire at this point,” he said. “I’m weighing a lot of options. Closing it down is probably a strong one… It all depends on what we want to do. I’m not ready, really, to move the studio.”

The business is picking up “slowly, very slowly,” since the pandemic started. Musicians anticipate live music opportunities this summer and want to have a record or a downloadable song to “get things going,” Zientara said.

Zientara has been recording for more than 30 years in his basement and the Shirlington location. The long list of those who have recorded at the hole-in-the-wall studio includes the Foo Fighters, Fugazi and Minor Threat.

“I’m sorry to see it go, but that’s the way that it is,” Zientara said. “So I’m OK with it — it’s just the natural evolution of things. You can’t stop progress. I hope what they do have is something that can complement the arts in the county.”

That is the county’s plan.

The purchase would “fulfill multiple goals of the Four Mile Run Valley Area Plan, the Public Spaces Master Plan and the County’s Arts and Culture Strategy,” according to a county report. “The property is uniquely positioned to host a variety of diverse programming such as musical, dance, and theatre performances, and a multidisciplinary arts festival, anchored by a weekly outdoor ‘Valley Market.'”

This sale would culminate a nearly two-year agreement between the County Board and the building’s owner, South Oakland Street, LLC. In June 2019, the county agreed to one day purchase the property for $3.4 million on the condition it made three annual, non-refundable, payments to South Oakland Street to delay the final sale for up to three years. 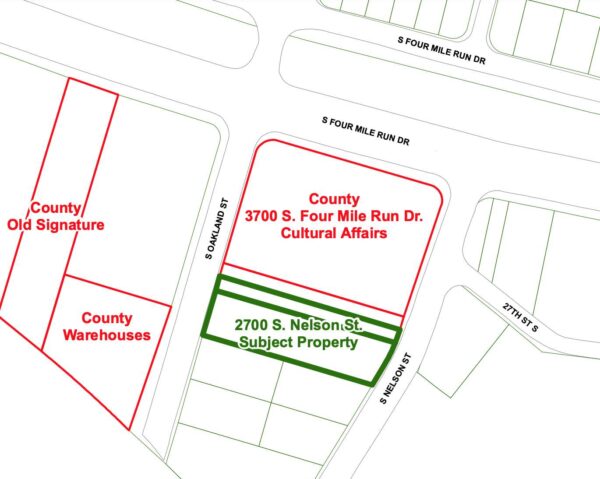 For the last two years, the County Board opted to make the yearly payments. Now, county staff is advising the Board to buy the property. Staff also recommend that the county give tenants until Dec. 31 to relocate.

AFAC will not be moving far. The organization, with its main building at 2708 S. Nelson Street, is temporarily leasing the additional space while it renovates a warehouse next door, which it purchased last year.

“The building was in serious need of renovation which we began in January of this year,” AFAC Executive Director and CEO Charles Meng said. “Once our renovation is completed in September of this year we will be vacating 2700 and moving back to our renovated warehouse.”