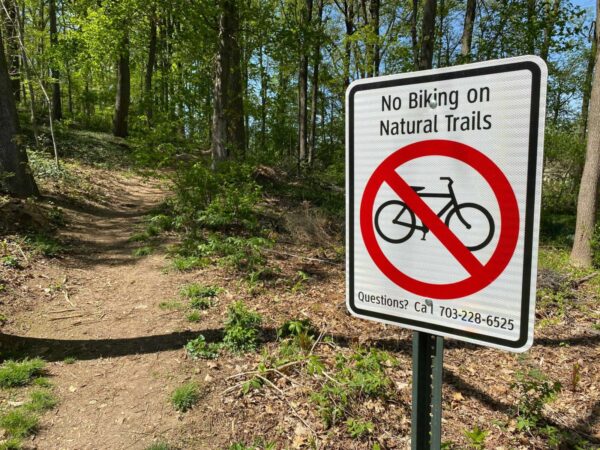 (Updated at 5:20 p.m.) A recent Facebook post has hit a sore spot with some Arlington cyclists and mountain bikers.

The Arlington Department of Parks and Recreation recently reiterated its policy on reserving natural surface “dirt” trails to walkers and hikers while allowing cyclists on paved trails.

The post drew the consternation of mountain bikers who have called on the county to let them use dirt trails for the past couple of years.

“I continue to be disappointed with the refusal of Arlington County Parks and Recreation to listen to the community and the County Board on this,” said one poster. “In both the Bicycle Element of the Master Transportation Plan and in the Public Open Spaces Master Plan, the Board said that Arlington would work towards opportunities for biking on natural surface trails. But 2 years later, DPR has been silent on the issue.” 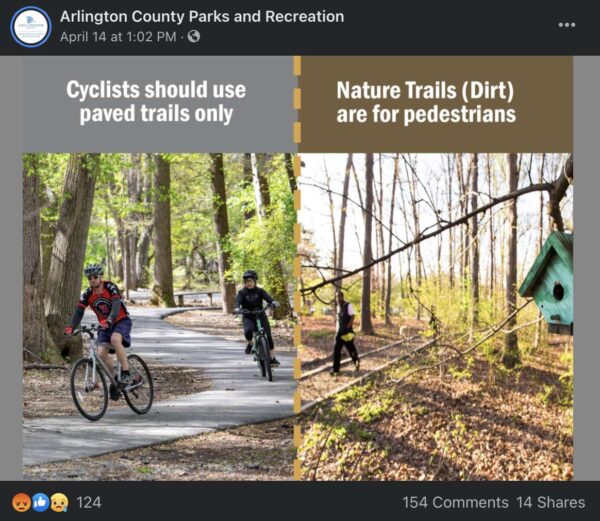 There are some indications that the department could consider providing natural trail options for cyclists in the future, however. The county has started developing a Forestry and Natural Resources Plan, which examines the impact of humans on Arlington’s natural resources, parks department spokeswoman Susan Kalish said.

“As we develop the Forestry and Natural Resources Plan, the county will look into ways we can include mountain biking in Arlington parks,” she said.

Currently, mountain bikers have to leave the county to ride any trails, said Matthew Levine, who founded Arlington Trails, a group that advocates for a system of managed, multi-use trails in the county. If they want to ride in Arlington, they forge informal trails, also known as “goat” or “social” trails.

The reaction to the Facebook post, combined with the informal trails and Arlington Trails’ advocacy, all signify that “people want to use their bikes on trails in the county,” he tells ARLnow.

“The real problem is that there is not a managed, multi-use natural trail system,” he said, pointing to Montgomery and Fairfax counties, which have miles of shared-use dirt paths.

That these exploratory paths exist “reveals the need for more trails,” he said, adding that his group is willing to help design and maintain them.

Not everyone is on board with the idea of mountain bike trails. Last spring, in response to concerns from the Bluemont Civic Association about unauthorized bike trails and jumps in Lacey Woods and Mary Carlin Woods, the parks department upped its enforcement and posted “no biking” signs. Similar complaints about rogue mountain bikers in other wooded areas of the county have been lodged on Nextdoor. 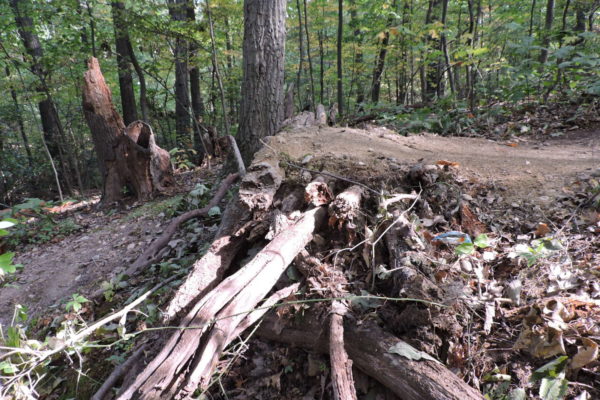 The county only maintains official trails in Arlington because of the negative impact the informal trails could have, Kalish said.

“In cases where damage is persistent, staff makes every effort to close, reclaim, and restore these areas to a natural state,” she said. “At the beginning of the pandemic, there was an increase in the development of social trails, including ones developed by mountain bikers who built ramps and cut down trees.”

In the past, staff have stopped youth who were found carrying shovels and hoes, removing plants and realigning trails, she said.

But Levine said it seems like cyclists are unfairly targeted as culprits of harming these natural areas — despite some studies concluding that if mountain bikers and hikers use trails at about the same rate, mountain bikers do not contribute more to environmental degradation.

Kalish indicated a path forward for mountain bikers on natural trails could come if a balance is struck between use and impact. Other, larger communities have done it, she said.

“We understand that placing signs and closing social trails are only pieces of the puzzle for successfully managing our trail system; so we will be looking at holistic solutions as we develop the Forestry and Natural Resources Plan,” Kalish said. “We look forward to working with the public as we move forward.”

But Levine is a little more cynical, describing past experiences when the group has been sidelined.

“The message is to work with stakeholders in the issue, but we have been rebuffed by the Urban Forest Commission and political leadership,” he said.