Big things are afoot at The Crossing Clarendon (2800 Clarendon Blvd) — a stretch of interconnected stores, restaurants, offices and residential space formerly known as Market Common Clarendon — as the center starts to brush off the dust from the past year.

As an overview: The Crossing refers to a multi-block stretch of mixed-use development that includes the Whole Foods, the Cheesecake Factory and the Apple Store. With some recent rebranding, the collection of retail on the opposite side of Clarendon Blvd from the Whole Foods is now known as The Loop.

Also new is the recently expanded and upgraded office space in the center of the development, now dubbed The Loft Office at The Crossing Clarendon. Construction on the project wrapped up last year, bringing with it a floral public art installation.

Jason Yanushonis, manager of investments for The Crossing owner Regency Centers, said retail leasing interest for the shopping center is picking up again as the end of the pandemic seems hopefully in sight. 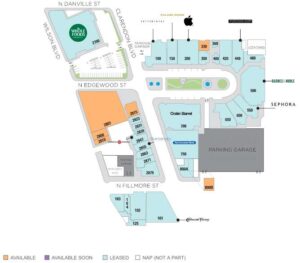 “The interest has been solid and picking up exponentially,” said Yanushonis. “Tenants are starting to seriously consider the next few years of their operation and what that’s going to look like.”

Soon-to-open Framebridge and Tatte Bakery and Cafe are the most recently announced additions, but Yanushonis said there’s been some interest in the Iota Club space.

“We took the roof off and created a two-level space,” Yanushonis said. “We don’t have anything we’re ready to announce yet, but interest for that office and retail space has been going up.”

“As people are starting to have more visibility for when things open up, they’re getting more comfortable with signing deals,” he continued. “Recently, the retail has really picked up, because there’s more visibility for openings. We’ve been happy with the level of activity for both, but the retail is making us specifically excited.”

For The Loop, Regency Centers is aiming to turn the area near the Barnes and Noble into a pedestrian-friendly walking plaza, closing a portion of the existing loop road, Washington Business Journal reported.

“We’re planning to go in front of the [County] Board this summer and start construction in early 2022,” Yanushonis said.