(Updated on 10/21/21) Construction on the final phase of a long-awaited residential redevelopment in Clarendon could begin in the fall if the county approves new changes from the developer.

The developer tells ARLnow there is a timeline for construction for what Shooshan calls “Building 1,” the second phase of the project. Shooshan and co-owner Trammell Crow Residential completed the first phase — the second and third buildings with a total of 333 units — in the spring, and the pair of buildings were sold in July. (An earlier version of this article incorrectly flipped the order of the two phases.)

“We expect to start construction this fall and anticipate the project to deliver in 2023,” CEO Kelly Shooshan said.

The timing emerged after the County Board approved public hearings that could allow Shooshan to change the appearance of the last of the three apartment buildings. The Planning Commission and the County Board are slated to hold the hearings during their respective meetings in June.

Shooshan’s revised building is shorter but it now exceeds tapering requirements for the Clarendon Revitalization District, according to a county report. The developer is requesting the map of the area be modified to fit the new specifications of the building.

The approved building height was set to start at 55 feet, stepping up to 75 feet and ending at 103 feet. Now, Shooshan is proposing a maximum height of 94 feet with a step down to 74 feet and then 55 feet. The length of the two steps has also been adjusted. 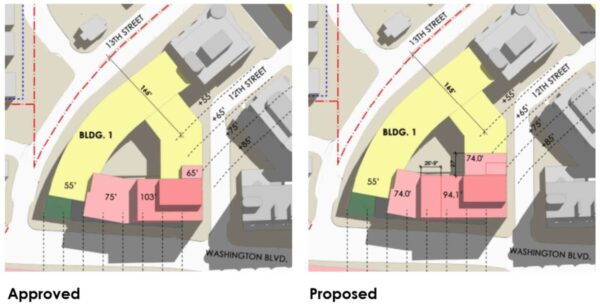 “These proposed changes create more gradual height transitions with the surrounding neighborhood and do not increase the total gross floor area” of one of the buildings, the report said. “Staff generally supports the proposed reduction in height and modified taper.”

The changes will also result in more units being added to the building, according to a staff memo. Filings indicate the number of units would increase from 247 to 269, DC Urban Turf previously reported.

When asked why the company is making the changes, Shooshan said “we are simply adjusting the height as part of our design development now that we are focused on the final phase of the Clarendon West project.”

Members of the Long Range Planning Committee expressed support for the proposed amendment, according to another report.

Shooshan also returned to the County Board in 2018 to request a decrease to the proposed parking ratio. At the time, the Lyon Village Civic Association expressed concern about how spillover parking would be mitigated.

END_OF_DOCUMENT_TOKEN_TO_BE_REPLACED

More Stories
No New Coronavirus Cases Reported Today in ArlingtonAsk Eli: What is the MLS/Bright MLS?