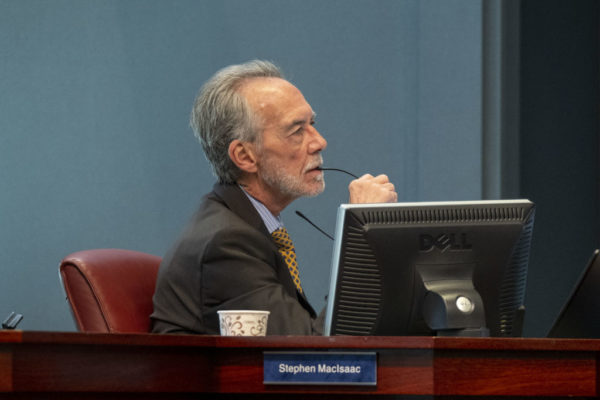 Arlington County Attorney Steve MacIsaac is leaving his position after two decades with the county government.

“Our attorney, Mr. MacIsaac, is going to be leaving us to return to where he started — to work for the Virginia Railway Express,” Matt de Ferranti, County Board Chair, said May 18 during a county meeting. “We will certainly miss Mr. MacIsaac.”

MacIsaac will be returning for a newly-created, full-time position as general counsel at Virginia Railway Express (VRE).

MacIsaac spent 21 years with the county as its county attorney, said County Board Vice-Chair Katie Cristol, who as Chair of the Northern Virginia Transportation Commission helped lead others to create the new position at VRE.

“We are losing, in my opinion, the finest county attorney in the Commonwealth of Virginia,” County Board member Christian Dorsey said. “That is a tough pill to swallow.”

MacIsaac has served as part-time counsel to VRE since planning for the commuter rail service began in the mid-1980s.

Before working for Arlington County, McIsaac spent 18 years at the County Attorney’s Office in nearby Prince William County, which VRE services.

VRE connects D.C. with Manassas and I-95 corridor communities — such as Fredericksburg and beyond — with commuter rail service. A revamped Crystal City station is part of VRE’s future expansion plans. VRE is planning on expanding with weekday evening and weekend service, and has existing plans to double its daily train passengers by 2040.

Prince William County Supervisor Margaret Franklin, the Potomac and Rappahannock Transportation Commission Chair, said MacIsaac’s “in-depth knowledge of VRE and the jurisdictions it serves will allow us to chart a course for the future that will better serve our communities and passengers.”

The County Board has appointed deputy county attorney MinhChau Corr as acting attorney after MacIsaac leaves. A search for his permanent replacement is expected to begin sometime this summer, county spokeswoman Cara O’Donnell said in an email.

MacIsaac’s last day will be this Friday, May 28. He’ll start his new position next week.