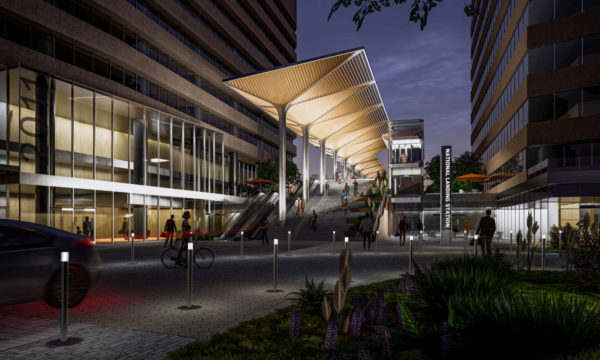 The expanded and relocated station is set to open in 2024 and Amtrak is currently “exploring” adding regional service to this station.

This according to a National Landing Business Improvement District report released earlier this month, detailing a number of significant transportation projects scheduled for completion over the decade (many of which long have been in the works).

Responding to inquiries from ARLnow, an Amtrak spokesperson wrote in an email that the planning remains underway “so it’s premature to discuss in depth expansion plans.”

The VRE station station will be built on land owned by real estate developer JBG Smith and will be designed to host Amtrak trains as well as Maryland Rail Commuter (MARC) trains. (Neighboring Alexandria has an existing Amtrak station.)

The $50 million two-track station will be built on Crystal Drive between 12th Street S. and Airport Access Road, about a quarter mile from the current one-track station. That existing station was built about 40 years ago and has been called a “operational bottleneck.”

Tracy Sayegh Gabriel, executive director and president of the National Landing BID, says bringing an Amtrak station to Crystal City would “shrink the region” and would enable a “direct one-seat ride between our region by commuter rail.” Some day those heading to New York City might be able to just head to Crystal City to get on a train, rather than trek into D.C. and battle crowds at Union Station.

Gabriel does note that Amtrak has yet to decide about adding a station there.

Along with a new VRE station, a new two-track railway bridge across the Potomac is also being planned. It will replace the 116-year-old Long Bridge and is estimated to be completed by 2030. Gabriel says the existing bridge is also a “bottleneck.”

Other projects highlighted in the report include the $650 million Project Journey at Reagan National Airport set to be completed this year, the continued construction of the new Potomac Yard Metro station, adding a new entrance to the Crystal City Metro station, replacing Route 1 with a “unifying, urban boulevard,” and a pedestrian walkway over the George Washington Memorial Parkway connecting Crystal City to the airport.

According to Gabriel, the airport bridge would create a five-minute walk from the train station to the airport, as opposed to a walk that’s currently long and somewhat dangerous.

All of these projects together, including the possible presence of Amtrak, could transform the neighborhoods collectively known as National Landing, said Gabriel.

“Investments of this scale are really positioning us to be the most connected downtown in the country,” she said.

Full press release about the report is below.

The National Landing Business Improvement District (BID) released a new report, Mobility Next, detailing the multibillion-dollar, public-private investment program that is transforming National Landing into the most well-connected downtown in the country. For the first time, the report provides a comprehensive description of National Landing’s transportation plans, including eight major projects with a combined estimated cost of $4 billion, which are currently in the pipeline and expected to deliver in phases over the next decade.

“Far from being an urban planner’s pipe dream or some unattainable transportation wish list, each of the projects outlined in National Landing’s Mobility Next benefits from large-scale public-private support and the identification of dedicated funding streams,” said Tracy Sayegh Gabriel, President and Executive Director of the National Landing BID. “Just as importantly, each of the projects are intended to complement one another in ways that vastly enhance mobility for everyone traveling to, from, or within National Landing, whether by Metro, commuter rail, plane, car, bike, foot, or other mode of transportation.”

According to National Landing’s Mobility Next, the public and private sector’s approach to this next generation of transit is rooted in four key pillars:

Highlights of the transportation program include:

Since its earliest days, National Landing, which encompasses the Northern Virginia neighborhoods of Crystal City, Pentagon City and Potomac Yard, has been defined by its convenience and access to robust transportation infrastructure. Keeping with this tradition, Virginia’s 2018 agreement with Amazon to construct a new headquarters in National Landing included commitments to fund a slate of projects that will build on the area’s existing network to create a place of unparalleled connectivity. The BID’s report highlights the significant progress that has been made over the past two years and provides an overview of how each project is being designed, funded, and built.