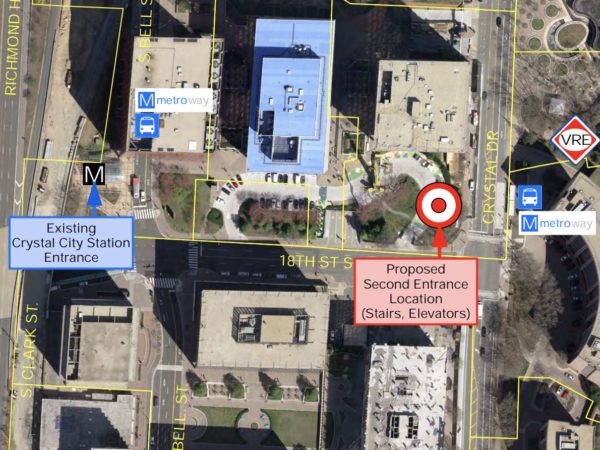 A second entrance to the Crystal City Metro station is closer to becoming a reality.

Developer JBG Smith will be performing preliminary engineering work on the planned second entrance, under a public-private partnership approved by the Arlington County Board over the weekend.

JBG will receive around $3.5 million for the work, which is expected to wrap up by May 2021. That will allow the new eastern Metro entrance — near the intersection of 18th Street and Crystal Drive — to open prior to a 2025 deadline.

More from a county staff report:

This Project has been included in four consecutive Capital Improvement Plans (CIP), including the current Fiscal Year (FY) 2019 – 2028 CIP at a cost of $90.765 million CIP. The project was also included in the Crystal City Sector Plan update, adopted in 2010. Funding includes $82.5 million of federal and state transportation grants associated with the State’s Amazon commitment for transportation infrastructure. The project also has an existing $5 million NVTA regional grant. As part of the package, the County committed to complete the Project in FY25.

Under a proposed project schedule, the new entrance could open as early as late 2023.

The Board also on Saturday approved an agreement with WMATA to support the design process for the entrance project.