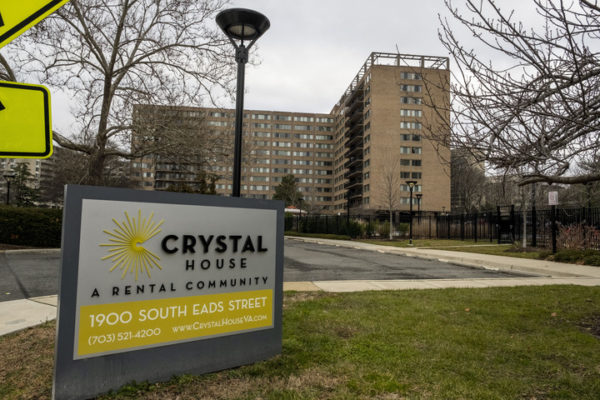 Crystal City could get more affordable housing under a new agreement between Amazon and Arlington County, announced earlier today.

The tech giant said in a new blog post that it would hand over to the county the rights to $40 million in vacant land within the Crystal House apartment property, on which Arlington County could develop more than 550 new affordable homes.

“Amazon is committed to promoting economic inclusion for all families and fostering a thriving community in and around Arlington,” said Catherine Buell, Amazon’s head of community development.

Construction is slated to begin in 2025, the Amazon blog post said.

The contributions are part of Amazon’s new Housing Equity Fund, a more than $2 billion commitment to create and preserve more than 20,000 units in Amazon’s three primary footholds: the Seattle area, Nashville and Arlington.

This announcement follows up on a commitment Amazon made in January to preserve 1,300 affordable housing units in Arlington as property values are rising amid its expansion. As part of the commitment, the company financed $381.9 million in loans and grants to a D.C. area housing nonprofit so that it could buy and stabilize rent at Crystal House (1900 S. Eads Street), a set of two apartment buildings one block from Amazon’s future HQ2.

The financing allowed Washington Housing Conservancy to preserve units in the existing Crystal House apartment complex, which has 828 units, for low- to moderate-income residents for 99 years.

“We are excited to build on our earlier work to preserve affordable housing at Crystal House in the heart of our new headquarters,” Buell said. “This donation to the County brings us a step closer to achieving up to 1,300 total affordable homes at the site for families earning moderate- to low-incomes.”

If the agreement is approved, the county will be carrying out a development plan that the County Board approved for the Crystal House property in December 2019. This site is set to have six more “Crystal Houses,” adding 820 units in total, as well as two public open spaces and a protected bike lane along S. Eads Street.

According to a county report, WHC does not intend to serve as the property’s developer, so Amazon purchased development rights for the vacant land. It approached the county in early 2021 with its plan to give the property to the county to develop.

According to Arlington County’s map of projects, the project’s status remains “approved.”

The Arlington County Board is set to review the agreement during its regular meeting this coming Saturday, July 17.

“Amazon is demonstrating dedication and commitment to the Arlington community with this game-changing opportunity to increase affordable housing in the County,” said Arlington County Housing Director Anne Venezia. “Future development on the Crystal House site will help bolster critical housing supply goals in an area with limited affordable housing options.”

If the board accepts the gift, the county will embark on a national search for a master developer and sub-developers. The site could have 554 affordable units on it by Jan. 1, 2028, according to a county statement.