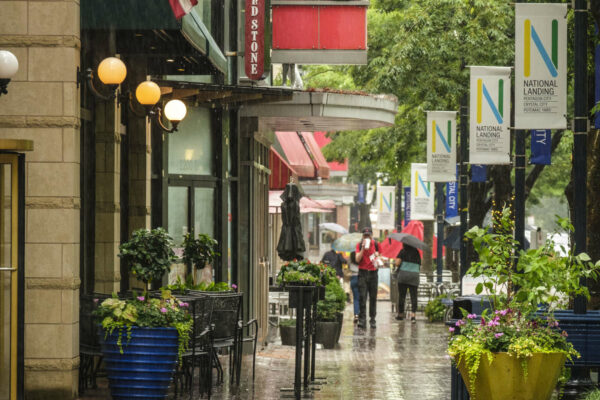 Broken Water Main Causes Pressure Problems — From the Arlington Dept. of Environmental Services yesterday: “A crew is stabilizing a broken water main that has caused pressure issues in the vicinity of Campbell Elementary School along S. Carlin Springs Road. Pressure should be returning to normal within the hour. Traffic diverted around work site. The break is on a 20-inch main. Greatest impact of pressure loss along Carlin Springs Rd from Rt 50 south to Columbia Pike and near the intersection of Wilson Blvd and George Mason.” [Twitter]

New W-L History Marker Under Consideration — “Four years after the installation of a marker celebrating the history of Washington-Lee High School was scotched by leaders of the county school system, a proposed revised marker – honoring the school now known as Washington-Liberty – is wending its way through the development process.” [Sun Gazette]

Next Community Convo with Police Chief — “Join Chief Penn and members of ACPD at the next Community Conversations with the Chief to share your thoughts on the future of policing in Arlington! Our next conversation will take place on Friday from 10 AM to 12 PM at Metro 29 Diner located at 4711 Lee Highway.” [Twitter]

Huske Signs Sponsorship Deal — “2020 U.S. Olympic medalist [and Arlington resident] Torri Huske announced that she’s signed a swimwear deal with TYR on Friday, making her the third high-profile swimmer set to begin their freshman year of college to do so. Huske, 18, will join Stanford University in the upcoming collegiate season. Terms of the deal have not been made public.” [SwimSwam]

Youth Baseball Team’s Championship Run — “Overcoming four tournament losses, the 9-under Arlington Storm Black managed to finish second in the Babe Ruth World Series. The Storm lost in the ultimate title game of the baseball tournament in Jensen Beach, Fla., by a 7-3 score, to Florence, Ala. The meeting was the fourth between the teams in the competition. About 90 minutes earlier that same day, Arlington had previously routed Florence, 11-1, to force a playback game between the two teams in the championship round.” [Sun Gazette]

Reminder: N. Glebe Road Closure — “All lanes of N. Glebe Road between Military Road and Chain Bridge Road, in the northern tip of Arlington, [are now] closed for construction… The nine-day closure is the culmination of the $10 million rehabilitation project for the nearly 50-year-old bridge over Pimmit Run, just before Chain Bridge. Between Friday, Aug. 13 and Monday, Aug. 23, crews will work to replace the entire bridge deck and its underlying beams.” [ARLnow]