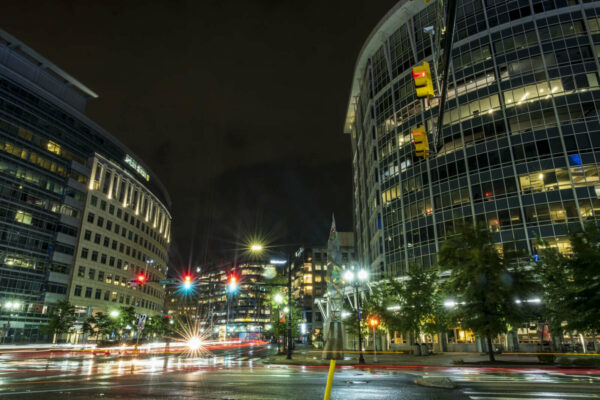 APS Getting EV Buses — “Arlington Public Schools (APS), working collaboratively with the County’s Department of Environmental Services (DES), will receive a $795,000 grant from the state, to be spent on three fully electric buses (EV buses) that will replace three with diesel engines. The EV vehicles, each with a capacity of some 65 passengers, will be equitably assigned to routes throughout Arlington. Currently there are no EV buses in the APS fleet of 200. The vehicles slated for replacement each travel some 8,000 miles a year.” [Arlington County, Gov. Ralph Northam]

No PARK(ing) Day This Year — “PARK(ing) Day is an annual international event where the public collaborates to temporarily transform drab parking spaces into small parks… Due to continuing COVID-19 issues, Arlington County will not participate in 2021 PARK(ing) Day. We hope to welcome participants back in 2022.” [Arlington County, Twitter]

Arrests in Ashton Heights Armed Robbery — ” The Arlington County Police Department’s Homicide/Robbery Unit is announcing the arrest of three suspects in an armed robbery that occurred during the early morning hours on Wednesday, August 18… At approximately 1:08 a.m., police were dispatched to the report of a robbery that had just occurred. Upon arrival, it was determined that the two male victims and a witness were sitting at a bus stop in the 700 block of N. Randolph Street when the three suspects approached.” [ACPD]

Arlington Org Deals with Afghanistan Fallout — “The young women of Ascend were used to spending their days doing yoga, preparing for mountain climbing excursions and teaching women at mosques in Kabul how to read… After the Taliban swept through Afghanistan this week, retaking control after two decades as the Afghan government collapsed, most of Ascend’s participants have been sheltering at home in fear of reprisal. Some have destroyed documents that would associate them with the Arlington, Va.-based nonprofit group, and are pleading for assistance from its leadership to help them find refuge in other countries.” [Washington Post]

Arlington Bishop Talks About Trans Youth — “The topic of transgenderism is discussed routinely in the news, on television shows and in schools. This prevailing ideology — that a person can change his or her gender — is impacting Catholic families, too, said Bishop Michael F. Burbidge of Arlington… Burbidge knows many will be criticized and ostracized for their belief that men and women cannot change their sex, but he asks the faithful to speak out anyway. ‘We cannot be silenced. The mandate to speak on this issue clearly and lovingly is greater than ever,’ he said.” [Catholic News Service]