When the Kristin Francis Team says they do it all, they’re not kidding.

“Our favorite thing is to tell our clients to give us the keys, and we’ll give them a big check,” said Kristin Francis. “They don’t have to worry about anything unless they want to be involved.”

This ranges from staging to renovations to showings. Francis will even sport an inflatable unicorn costume and canvas a neighborhood.

And it’s not just about getting your home sold. It’s about selling your home “without a dollar left on the table,” Francis said. Her team consistently sells homes for over asking price.

So it makes sense the Kristin Francis Team was voted one of Arlington’s favorite real estate agents for sellers in the Arlies, ARLnow’s community awards.

We recently caught up with Francis to learn more about what makes her a go-to agent.

Buying Her First Condo at 24

Back in 2004, Francis working a corporate job in marketing. Her officemate purchased a home, and it sparked Francis’ interest.

The only problem? She wasn’t quite sure she could afford it. She didn’t have much money. In fact, she had what felt like $1 million in debt.

“I just thought if she can do it, maybe I can do it, too,” she said. “So I started asking questions and figuring out what rocks I had to move.”

She purchased her first condo at 24. Then, she started helping her friends buy homes and realized she could turn this into her career. She got her real estate license in 2009 and cut ties with corporate America around 2012.

It’s worth noting she sold her condo two years later and made “a killing,” fueling her passion for using real estate as a wealth-building tool. Now, she helps others do the same.

Getting to Know the Kristin Francis Team

Here’s a fun fact: The Kristin Francis team is all women, and a lot of them are moms. 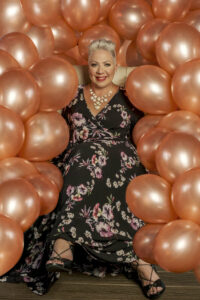 They all gravitated toward one another because of their similar goals. It’s not about hitting quotas — it’s about building relationships. In fact, all their business is repeat and referral, a testament to the strong bonds they’ve built.

Plus, they all like to have fun. Francis likes to say, “We don’t take ourselves too seriously, but we take our clients seriously.”

She points to her blue hair and her trusty inflatable unicorn costume as evidence.

They’re also committed to giving back. A portion of commissions goes toward a local or international cause that supports one of their pillars: Food, water, warmth and rest. This ranges from collecting donations for local families whose homes have been destroyed by fires to buying chickens so a family in Bali could start a farm.

Selling a Home With the Kristin Francis Team

According to Francis, anyone can sell a house in this market — “it’s who can sell it without a dollar left on the table,” she explained. “We have outsold and outperformed almost every agent out there.”

The key? Strategy. They’re not just throwing your home on the MLS and calling it a day. Selling your home starts with a conversation around your goals and the best way to accomplish them.

There are a lot of factors to weigh, and Francis’ team will help you consider them all. If your house needs a renovation? Their sister construction management company, Upcycle Homes, will take care of it. If you need staging? Posh & Pine, another sister company that stages homes, has you covered.

And, as a rule of thumb, they never ask anyone to do anything to their home unless it’ll yield a 150% return or more.

From there, Francis and her team get to work. They have listing, buying and administrative teams that’ll handle everything from hosting open houses to the nitty-gritty paperwork.

Throughout the process, the team has got your back, making sure the process is as seamless as possible. In fact, on the first open house weekend, they’ll give you a gift card — maybe to a movie or a local spa — as a way to make sure you can step back and relax.

Want to learn even more about the Kristin Francis Team? Stop by their website, shoot them an email or give them a call at 571-348-4604.

END_OF_DOCUMENT_TOKEN_TO_BE_REPLACED

More Stories
Is the ‘Arlington Way’ Too Narrow to Include All Residents? Some Say ‘Yes’Just Reduced Properties in Arlington