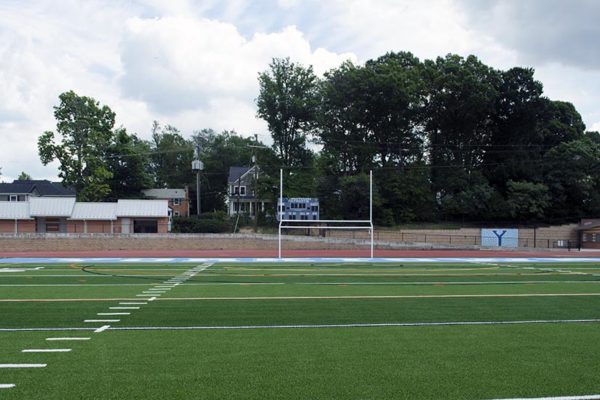 (Updated at 2:15 p.m.) Yorktown High School’s homecoming football game Friday night was marred by “unacceptable behavior” by a group of students during halftime.

That’s according to principal, Kevin Clark, who sent a scathing email to Yorktown families on Saturday, ahead of the school’s homecoming dance.

“Students reported that during the halftime performance and thereafter, several students harassed fellow Yorktown students using inappropriate and unacceptable language of a sexual nature and inappropriately touched a student,” Clark wrote. “This created an unsafe environment and does not reflect the values of our students and staff at Yorktown.”

Clark promised to “fully investigate and address reported behavior from the football game.”

Several parents, citing a social post describing what happened, told ARLnow that the harassment was aimed at girls in the band and the color guard. That could not be immediately verified. No classes are being held today due to the federal holiday.

The Arlington County Police Department reported today that a girl was touched inappropriately during the game.

SEXUAL BATTERY (late), 2021-10090195, 5200 block of Yorktown Boulevard. At approximately 4:57 p.m. on October 9, officers were dispatched to the police station for the late report of an assault. Upon arrival, it was determined that at approximately 9:00 p.m. on October 8, the juvenile victim was walking in the area during the Homecoming Football Game when the unknown suspect inappropriately touched her. There is no suspect(s) description. The investigation is ongoing.

Last year Clark addressed another controversy with families, after a banner created for graduation was seen by some as racist.

The full letter about the behavior at the homecoming game is below.

I’m writing to follow up on last night’s Homecoming Football Game and provide an update about tonight’s Homecoming Dance. While the vast majority of our students enjoyed an exciting and positive experience, we are extremely disappointed and concerned about the unacceptable behavior of several students during the halftime performance and second half of the game.

Students reported that during the halftime performance and thereafter, several students harassed fellow Yorktown students using inappropriate and unacceptable language of a sexual nature and inappropriately touched a student. This created an unsafe environment and does not reflect the values of our students and staff at Yorktown, where we teach Respect for Others, Community and Self (ROCS) at all times.

We harshly condemn the actions of these students and will not tolerate such behavior at any Yorktown or APS activity. We are taking these reports seriously and are investigating them thoroughly. Students found to be responsible for this behavior will be held accountable. Additionally, we will take immediate measures (listed below) so that all students have a safe environment to learn and participate in school activities. This type of behavior impacts our entire school community. We need your support to address this moving forward and encourage you to speak to your child about the importance of positive and safe interactions.

We also want to ensure that tonight’s Homecoming Dance is safe and enjoyable for all of our students who will be attending. We emphasize that inappropriate language and behavior will not be tolerated, and any student suspected of being under the influence will be denied entry and asked to leave. Tickets will not be for sale at the door, and there will be no re-entry if students leave the dance.