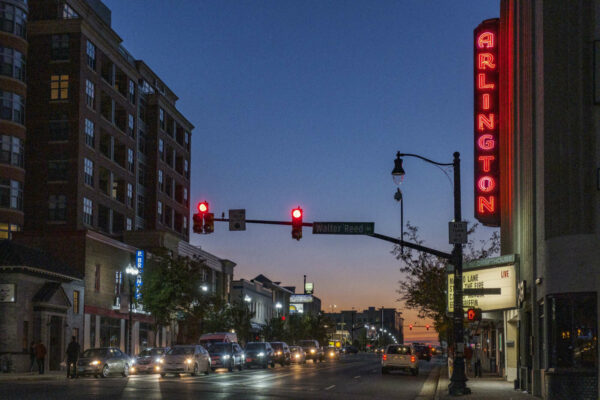 In a bid to bring more businesses to Columbia Pike, Arlington County staff are seeking to ease zoning regulations for the area.

The Pike could see a variety of light industry businesses, from animal boarding to breweries to indoor urban farms, if the County Board approves the changes, which are slated for a vote next Saturday, Nov. 13.

Development along Columbia Pike is governed by the Columbia Pike Form Based Code, which favors mid-rise mixed-use buildings with housing and ground-floor retail. The kinds of commercial operations the code currently allows by-right or with a use permit, however, are limited.

Permitted uses on the Pike were last revised in 2015 and, according to the county, “the nature of retail has since shifted,” warranting another update. After studying market conditions on the Pike in 2019, staff decided updating the code was the best way to encourage commercial activity.

“Increasing use flexibility through zoning and land use recommendation was identified as most efficient and impactful step to move work forward and permit wider range of uses,” county planner Ebony Dumas told the Planning Commission last night (Monday) during a meeting.

She noted business and community leaders have also advocated for greater retail flexibility to tackle the high vacancy and turnover rates for ground-floor retail and to eliminate use permits, which can be a substantial hurdle for new entrepreneurs.

“There’s a lot of support to update and consider new uses,” Dumas said, recapping the last year’s worth of community engagement on the proposal. “Most agree the existing use table over-utilizes use permits, and more uses should be by-right.”

“Neighbors, business leaders and business owners all along the Pike have pretty much from day one said, ‘What we want is business, what we want are people, what we want is livelihoods,’ and with that, they want the maximum flexibility possible,” he said.

Of the new uses, staff proposed allowing shared kitchens and urban agriculture by-right, meaning business owners would not need a use permit, which makes them subject to certain conditions. Last night, the Planning Commission unanimously voted in favor of allowing beverage facilities and other artisan workshops by-right, too.

This change came after a discussion of whether permits ought to regulate manufacturing uses, as they can be accompanied by noises, smells and debris that could be disruptive.

“Clarendon has a small brewery and once in a while, I can smell it,” Lantelme said. “It’s a noticeable smell, but it exists now, and we’re able to deal with it in Metro corridors, so I think it is manageable.”

Commissioners also discussed animal boarding on the Pike, referencing ARLnow’s article about a doggie daycare and boarding facility coming to Clarendon. The owner is facing some regulatory hurdles as the county’s zoning ordinance does not contain the word “animal boarding” and instead refers to any facility boarding more than three dogs as a “kennel,” which is only permitted in industrial districts.

Dumas said planners propose adding the word “animal boarding” to the Pike’s form-based code, allowing that as an approved use provided that all activity is conducted inside and dogs are supervised 24/7.

The plight of “the poor business owner who’s having a zoning issue with respect to issue of the definition of ‘kennel’… made me really realize, the goal of this for the Pike is to bring businesses where we currently are struggling to get businesses,” Hughes said.

These new uses will also be open to commercially-zoned sites that were built before the form-based code and have not since been redeveloped. Dumas says this was a priority for the Northern Virginia Hispanic Chamber of Commerce and the economic development committee of the Arlington NAACP branch.

“Many people of color experience financial barriers when looking to secure a brick and mortar location or expand their operations, so having a wider range of rent prices along Columbia Pike would provide some relief and would go a long way to not excluding smaller businesses from this opportunity,” Dumas said.