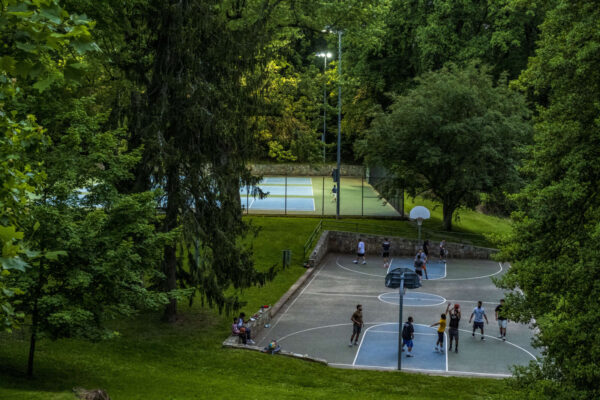 Arlington’s parks department is identifying tennis and basketball courts that could also accommodate the increasingly popular sport of pickleball.

The department is surveying residents to gauge court usage and the need for pickleball courts, and see where they think pickleball lines can be added. The Department of Parks and Recreation currently maintains 18 multi-use courts that allow pickleball and 1 single-use pickleball court.

But that’s not enough to meet the demand.

“Arlington has seen a significant growth in pickleball with increase in requests for single-use and multi-use courts,” DPR Associate Planner and Project Manager Bethany Heim said in a presentation. “While Arlington has 19 outdoor pickleball courts, players are using tape or chalk to create more pickleball courts on existing tennis and basketball courts.”

More and more Arlingtonians have picked up pickleball, especially during the pandemic. The YMCA Arlington Tennis & Squash Center in Virginia Square repainted three tennis courts to make room for six pickleball courts earlier this year, and one local player says membership in the local Facebook group Pickleball Friends of Arlington, Virginia has surged.

Noted local ultramarathoner Michael Wardian has also taken up the sport, and the parks department now offers pickleball classes for all ages and abilities.

Pickleball combines elements of tennis, badminton and ping-pong and is played on a court that is smaller than a tennis court, using a modified tennis net, Heim said. It sometimes brings upwards of 40-50 players to a court at one time.

DPR has relied on adding pickleball lines to existing courts, and that’s still the plan in the short term. Arlington has 87 full tennis courts and five half-courts, as well as 76 full basketball courts and 12 half-courts — some allow pickleball, volleyball and futsal, a soccer-like game played on a hard court.

“A growing trend in parks is to have a multi-use facilities so that a wider variety of activities can be enjoyed at one place,” Heim said. “The [Public Spaces Master Plan] references… using multi-use courts to accommodate the growing interest in pickleball.”

The department striped its first tennis court to allow pickleball in 2015, and in 2017 it piloted a basketball-pickleball court at Walter Reed Community Center. Today, there are multi-use courts at Glebe Road Park, Gunston Park, Fort Scott Park, Lubber Run Park and Walter Reed.

“While multi-use courts are effective, Arlington does not have a dedicated pickleball facility with more than one court,” Heim said.

The survey is open through Friday, Nov. 19. DPR plans to use the information to determine how to make sure the changes are done equitably and to identify potential conflicts with making single-use courts multi use.

After the survey closes, DPR will develop draft criteria for converting single-use courts to multi-use courts and identify eligible sites. There will be another public engagement opportunity in January. Finalized criteria and a list of identified sites will later be published online.

END_OF_DOCUMENT_TOKEN_TO_BE_REPLACED

More Stories
NEW: Get ready for the first freeze of the season tonightLots of new stores and restaurants are opening at Pentagon City’s Westpost over the next year